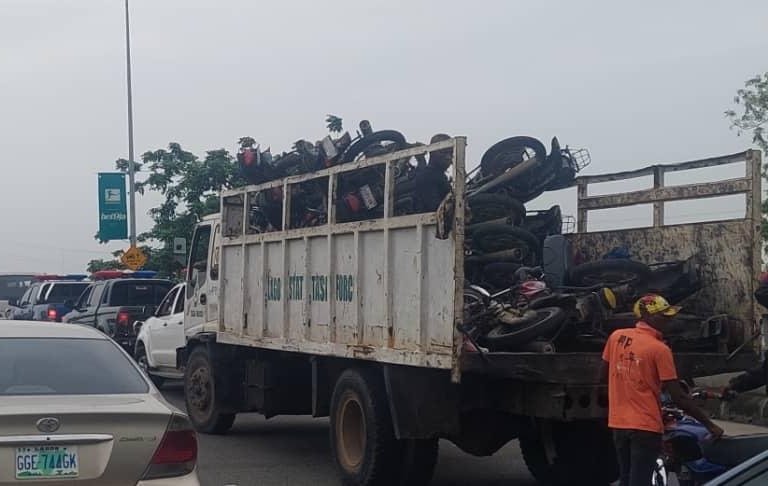 Following the total ban on operation of commercial motorcycles popularly known as Okada on all highways across six Local Government Areas and nine Local Council Development Areas of Lagos State by Governor Babatunde Sanwo-Olu, the chairman of the Lagos State Taskforce, CSP Shola Jejeloye has said that the agency will on Friday crush another set of 2,228 impounded motorcylces to further make the enforcement of the ban thorough and effective.

Speaking in his office at the headquarters of the agency at Bolade, Oshodi, the chairman highlighted that the agency has been carrying out crushing of bikes in time past, the last of which was on May 25, 2022.

He said the agency would further intensify its effort in ensuring that all impounded Okada are crushed after following the due process of traffic laws as enshrined in Lagos State Transport Sector Reform Law of 2018.

The chairman stated that the laws are very clear for the Okada operators to see that their actions are in complete violation of the transport reform laws of the State, which states that “no two persons shall ride, drive or propel a motorcycle or the tricycle on a major highway within the State, and any person in contravention of this provision commits an offence and will be prosecuted.”

CSP Jejeloye added that the Taskforce efforts have been doubled since June 1 ban, although compliance rate is very high and encouraging, but motorcycle operators are not to be trusted.

He said their style of operation is synonymous to a gorilla warfare- “when we retreat, they advance and when we advance, they retreat”, stressing that, enforcement on the ban has come to stay.

“We will ensure not a single offender operating Okada on the highways will be spared. We will keep watch and continue patrolling the affected parts of the State to ensure they do not get back on our roads.”

Jejeloye noted that in the past he had made series of appeals verbally and through the mass media on the dangers of motorcycle operations in the State, but the perpetrators remained hell bent on carrying on with their daredevil style of riding against traffic, speeding recklessly, damaging the vehicles of other road users, and endangering their lives, passengers, pedestrians and other road users.

“The set time has come for us to put an end to this menace completely and we will carry it out to the tooth. Okada operators had a grace period of two weeks as provided by Mr Governor, Mr. Babajide Sanwo-Olu before we hit the streets yet we still have pocket of them violating the motorcycle order”.

Meanwhile, the Taskforce has impounded over 259 bikes during the first two days of the ban while 18 suspected riders and passengers were arrested. “All the suspects will be prosecuted for violating the state laws. Passengers will not be spared this time around, and they will be charged accordingly in the court of law,” he said.

Jejeloye urged Lagosians to embrace other means of transportation. He added that putting an end to this menace is a collective responsibility. He therefore appealed to commuters to desist from patronizing okada operators in order to keep them out of the illegal business.