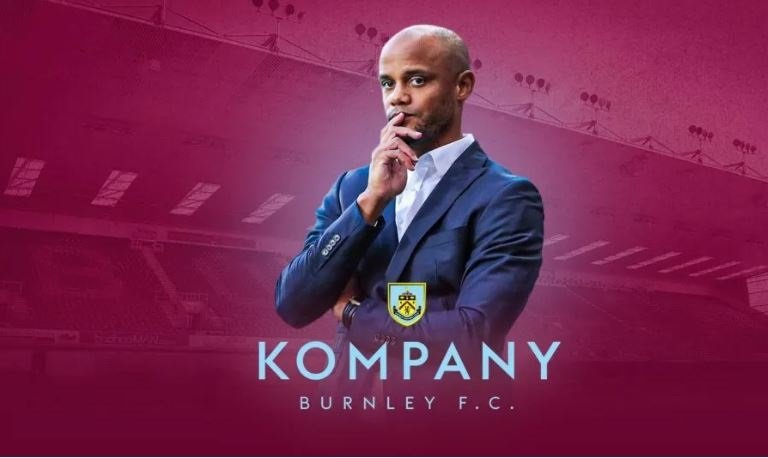 Burnley have appointed premier league legend Vincent Kompany as their new manager after the Belgian left his role as Anderlecht boss.

Burnley had been in contact with former Manchester City captain Kompany about taking over as manager after parting ways with long-serving leader Sean Dyche in April.

Mike Jackson took over as caretaker manager but was unable to keep the team in the Premier League, with a 2-1 defeat at home to Newcastle on the penultimate day consigning the Clarets to the Championship.

After being linked with Bundesliga side Borussia Monchengladbach, among other clubs, Kompany has acknowledged to turning down other offers to take the job at Turf Moor because he sees an “incredible future.”

With the club back in the Championship for the first time since 2015-16, when they returned to the top division at the first try, the former Manchester City defender has a big rebuilding project.

We are delighted to confirm the appointment of Vincent Kompany as first-team manager.

“It’s true though, I did have other offers,” he told burnleyfootballclub.com.

“But when I laid out all of the offers on the table, some were perhaps more appealing in terms of name and what they would represent to the wider public, but I had a chance to look in great depth into everything that Burnley is.

“I looked at what Burnley wanted to achieve and I’m not saying it’s easy, but I saw a path which was different than that at other places.

“I see a plan and I see good people. I want to work with people that are already at Burnley, I’m allowed to bring good people with me as well, and together we don’t have to change everything.

“To make a long answer short, I’ve chosen this project because I know that after a difficult start will come an incredible future.”

Kompany stepped down as head coach of Anderlecht in late May after the club finished third in the Belgian First Division A last season.

He takes over at Lancashire at a critical period, with a total of 14 professionals confirming departures at the end of last season, including captain Ben Mee and first-team regulars James Tarkowski, Aaron Lennon, Phil Bardsley, and Erik Pieters.

“Vincent is a proven leader and I’ve been very impressed with his ideas for Burnley, his appetite to succeed and his focus on leading the club back to the Premier League.

“Vincent has shown impressive credentials in leading one of Belgium’s biggest teams back to European football and a Cup Final last season and we’ve been excited by his philosophy, approach and ambition for the club.”