Buhari hints at continuity, says he will pick his successor
Advertisement 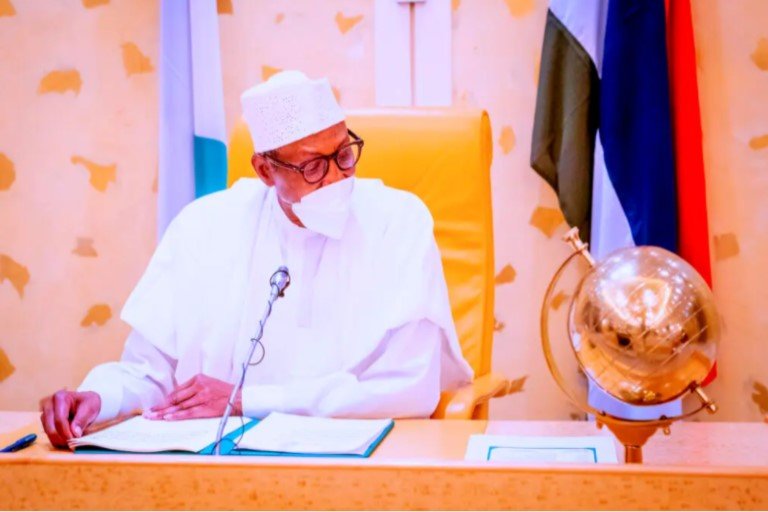 President Muhammadu Buhari has stated that he will pick his successor in line with the All Progressives Congress (APC) internal policies.

The President also hinted at continuity at a meeting on Tuesday at State House, Abuja with the 22 governors and the national chairman of the APC, Senator Abdullahi Adamu in attendance.

The President also urged all members of the APC to ensure that they win the 2023 presidential election. “I am delighted to address this gathering of the Progressive Governors’ Forum as part of the consultative processes that have always strengthened the internal dynamics of our Party, the All Progressives Congress, (APC).

Buhari said, “You will all recall that APC came to power at the center in 2015 through a cohesive machinery, notwithstanding its status as the opposition party. Similarly, in 2019, it was returned to power under my leadership, because of the dividends of democracy delivered to Nigerians irrespective of their political leanings.

“The Party has since grown in strength and capacity to govern. The key to both electoral successes is the ability of the party to hold consultations and for its members to put the nation above other interests.

“The transition processes for the 2023 General Elections have commenced in earnest and I note that the most successful Political Parties globally have always relied on their internal cohesion and a strong leadership brand to achieve bigger electoral fortunes. Our party, the APC, shall not be any different, more so as we are still implementing the blueprint for a more prosperous nation.

Buhari explained that, “As I begin the final year of my second term as President of the Federal Republic of Nigeria and leader of the Party, I recognize the compelling need for me to provide stronger leadership to the Party under this transition process and to ensure that it happens in an orderly manner.

He added that, “Such leadership is required so that the Party remains strong and united. It is also needed to improve our electoral fortunes by ensuring that it retains power at the center, hold the great majority in various legislative chambers and also gain additional number of states at state levels.

“In pursuit of the foregoing objectives, the Party has successfully established internal policies that promote continuity and smooth succession plans even at the state and local government levels. For example, first term Governors who have served credibly well have been encouraged to stand for re-election. Similarly, second term Governors have been accorded the privilege of promoting successors that are capable of driving their visions as well as the ideals of the party.

“In a few days, the Party will be holding its Convention during which primaries would take place to pick the Presidential Flag Bearer for the 2023 General Elections. This is a very significant process and its outcome should prove to the world, the positive quality of the APC regarding democratic principles, culture as well as leadership.

He noted that, “As we approach the convention, I appeal to all of you to allow our interests to converge, our focus to remain on the changing dynamics of our environment, the expectations of our citizens and the global community. Our objective must be the victory of our party and our choice of candidate must be someone who would give the Nigerian masses a sense of victory and confidence even before the elections.

“In keeping with the established internal policies of the Party and as we approach the Convention in a few days, therefore, I wish to solicit the reciprocity and support of the Governors and other stakeholders in picking my successor, who would fly the flag of our party for election into the office of the President of the Federal Republic of Nigeria in 2023,” Buhari said.

“I wish to assure you that the consultation process shall continue to ensure that all aspirants and stakeholders would be brought on board right through to the convention. This would also ensure that any anxiety occasioned by different factors are effectively brought under control and that our party emerges stronger.

Buhari to APC govs, stakeholders: Allow me pick my successor