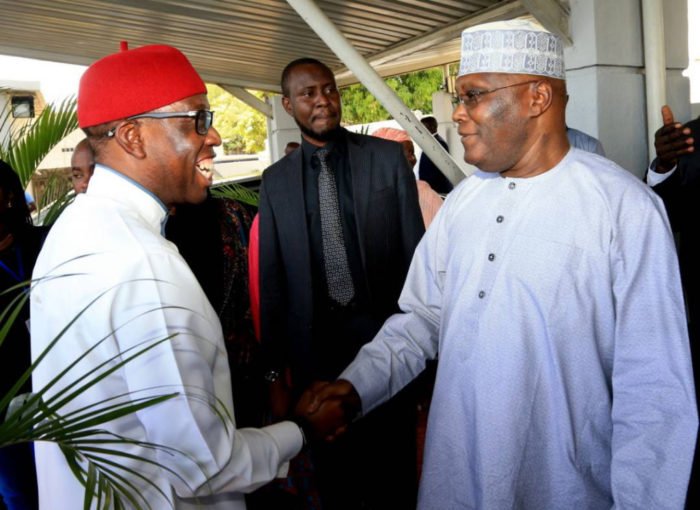 Abubakar’s decision to pick Okowa comes after a PDP committee report endorsed Governor Nyesom Wike of Rivers state according to some reports.

In a tweet on Thursday, Abubakar declared that Okowa will be his deputy if he wins at the polls in 2023. “I am delighted to announce Governor Ifeanyi Okowa as my vice presidential candidate.

“I look forward to travelling our great country together, engaging with all Nigerians and building a shared future of peace, unity, and prosperity for all,” he said in the personally signed post.

I am delighted to announce Governor @IAOkowa as my Vice Presidential candidate. I look forward to travelling our great country together, engaging with all Nigerians and building a shared future of peace, unity, and prosperity for all. As One We Can Get It Done. #OneNigeria. -AA pic.twitter.com/JyKxTIhiUh

Chronicle NG reports that Okowa delivered the delegate votes of Delta state to Abubakar during the PDP presidential primaries, helping him to oust Wike.

The National Publicity Secretary, Debo Ologunagba, said reports in the media that the PDP has picked Wike could only be in the realm of rumour, saying the National Working Committee of the was looking into the matter and consulting, in order to consider the best vice presidential candidate for the party in the 2023 elections.

As part of moves to press down its process, the NWC of the PDP met in Abuja on Wednesday at 11 AM, where the advisory board resumed intense deliberations.

It was also reported that the PDP selection committee had recommended the Rivers State governor after 13 of 17 members, who attended the meeting at the PDP National Secretariat, yesterday, voted in favour of Wike. At the meeting, three members voted for others, while the chairman, who can only vote when there is a tie, did not vote.

Meanwhile, after the keenly-contested PDP primary, Wike had scored 237 against the 371 delegate votes at the PDP presidential primary secured by Atiku, who won the party ticket.