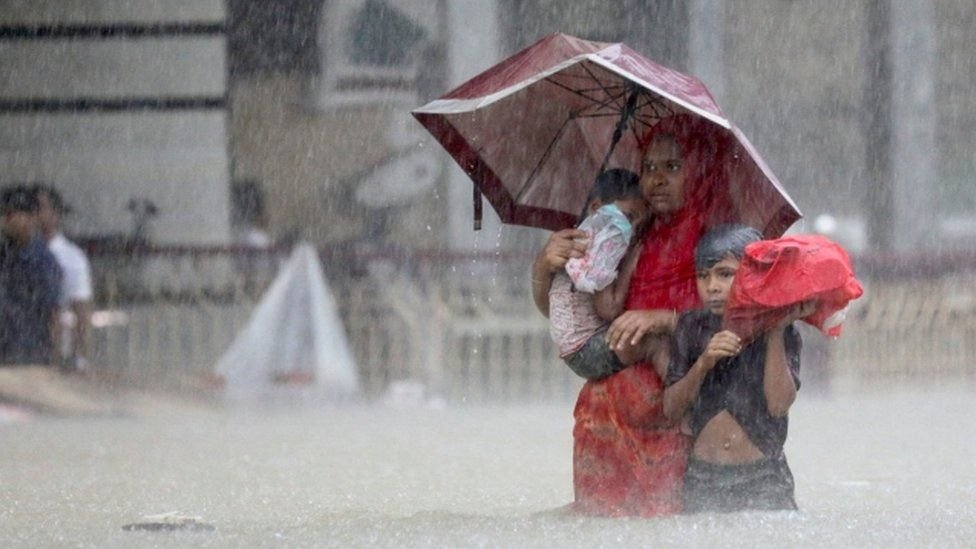 In India and Bangladesh, at least 59 people have perished as a result of lightning strikes and landslides caused by strong monsoon rains.

Millions of people have been left stranded, and rescuers have struggled to reach individuals who have been affected.

Flooding is predicted to worsen over the following three days, according to forecasters.

Officials from Bangladesh’s government have labelled the recent flooding as the worst since 2004.

Unrelenting rains have inundated large swaths of the country’s north-east area in the previous week, exacerbated by runoff from torrential downpours throughout India’s highlands.

Schools have been converted into makeshift shelters and troops have been deployed to evacuate households cut off from neighbouring communities as a result of rising waters.

“The whole village went under water by early Friday and we all got stranded,” Lokman, whose family lives in Companiganj village in Bangladesh, told AFP news agency.

“After waiting a whole day on the roof of our home, a neighbour rescued us with a makeshift boat. My mother said she has never seen such floods in her entire life,” the 23-year-old added.

More than 1.8 million people in Assam, India’s neighbour, have been hit by floods following five days of nonstop rain.

Himanta Biswa Sarma, the Chief Minister of Assam, told reporters that he has asked district officials to provide “all required support and relief” to individuals affected by the flooding.

“Our home is completely inundated in water. I’ve never witnessed such massive floods before in my life “According to Husna Begum, a resident of Udiana village in Assam,

Since Thursday, the 28-year-old has been living with her children in a flimsy plastic tent. “In this camp, there is no drinking water. I’m unable to take my baby to the doctor because he has a fever “she stated.

Ronju Chaudhary, who lives in the same village, described the scale of the flooding. “We are surrounded by water on all sides. There’s water inside our homes too,” he said.

The rains arrive as Bangladesh’s Sylhet region is still recovering from the worst floods in nearly two decades, which struck in late May, killing at least ten people and affecting four million more.

Bangladesh is on the verge of a humanitarian calamity, according to former MP Syed Rafiqul Haque, with “almost the entire Sylhet-Sunamganj belt… under water and millions of people… stuck.”

Officials estimate that 3.1 million people have been displaced in the region, with 200,000 of them now living in improvised shelters on higher ground.

Seasonal monsoon rains provide a lifeline for farmers across South Asia, but they also result in lives and property destruction each year. In recent years, both Bangladesh and India have suffered increasingly severe weather.

While environmentalists can not attribute individual weather occurrences to climate change, they do warn that it could lead to additional disasters, particularly in low-lying and densely populated areas.