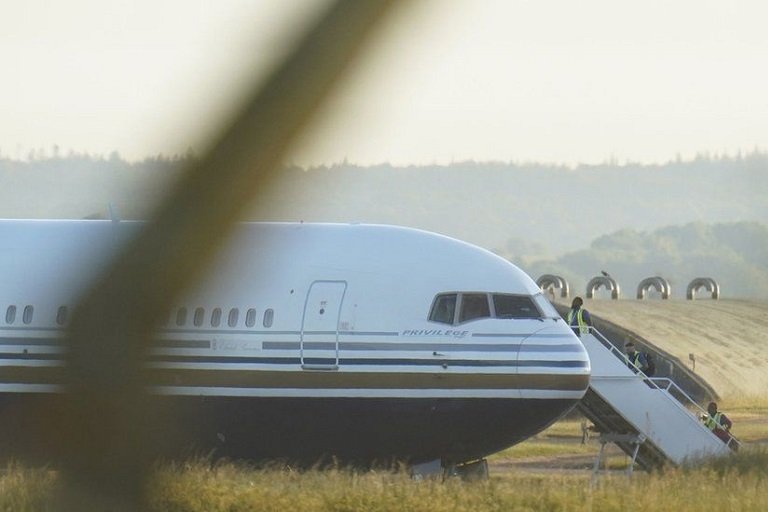 The first flight due to take asylum seekers from the UK to Rwanda was cancelled minutes before take-off after legal rulings on Tuesday evening.

Up to seven people had been expected to be removed to the east African country.

But the flight was stopped after a late intervention from the European Court of Human Rights (ECtHR) led to fresh challenges in the UK courts.

Home Secretary Priti Patel said she was “disappointed” but added: “Preparation for the next flight begins now.”

However, James Wilson from campaign group Detention Action said the rare intervention from the ECtHR “shows how potentially dangerous” the Rwanda removals are.

He said the court had recognised no one should be forced on to a plane until the policy was fully scrutinised in a High Court hearing next month.

The Rwanda asylum plan, announced by the government in April, sees some asylum seekers who cross the Channel to the UK given a one-way ticket to Rwanda to claim asylum there instead. The government said the scheme would discourage others from crossing the English Channel.

The cancellation of the flight followed days of arguments in UK courts, ending with the home secretary getting the go-ahead to begin transporting some of the asylum seekers.

But a judgement from the ECtHR in Strasbourg halting the deportation of one of the men arrived just after 19:30, and triggered a series of legal challenges in London courts. By 22:15 all the passengers had been removed from the plane, which then returned to Spain.

The Strasbourg human rights court – part of the Council of Europe, which still counts the UK as a member, rather than the European Union – said an Iraqi man known as KN faced “a real risk of irreversible harm” if he remained on the flight.

Whereas the High Court in London had found that KN could be returned to the UK if his bid to overturn the Rwanda transportation policy succeeded, the ECtHR said there was no legally enforceable mechanism to ensure he could come back from east Africa.

The Strasbourg court also said the UN had raised concerns that UK asylum seekers transferred to Rwanda would not have access to “fair and efficient” procedures to determine their refugee status.

And it noted that the High Court had acknowledged there were serious issues regarding whether Rwanda had been correctly assessed as a safe third country.

The home secretary said these “repeated legal barriers” were similar to those the government faced on other deportations, adding that “many of those removed from this flight will be placed on the next”.

Ms Patel said that she had always maintained this policy would “not be easy to deliver” but added it was “very surprising” the European court had intervened after the government had been permitted to go ahead with the flights by domestic courts.

“Our legal team are reviewing every decision made on this flight and preparation for the next flight begins now,” she said.

The Rwandan government said it remained committed to its deal with the UK and was “not deterred” by the failure of the first flight to depart.

Spokeswoman Yolande Makolo said: “Rwanda stands ready to receive the migrants when they do arrive and offer them safety and opportunity in our country.”

Earlier on Tuesday, Prime Minister Boris Johnson told his cabinet that people undermining the Rwanda policy were “abetting the work of criminal gangs” and said the government would not be deterred from the policy.

Asked by reporters if the UK would withdraw from the European Convention on Human Rights, which the Strasbourg court upholds, Mr Johnson said it “very well may be” necessary to change the law.

But groups supporting asylum seekers urged the government to change course and provide a fair way for people fleeing persecution to seek refuge in the UK.

Refugee Council chief executive Enver Solomon said the fact the flight could not take off was “indicative of the inhumanity of the plan” and said the government had to rethink its plans by having “a grown-up conversation with France” over Channel crossings by migrants.

Mr Wilson from Detention Action said the European Court of Human Rights, founded in the wake of the Holocaust, had “done what it was established to do”, calling it “a night for the history books”.