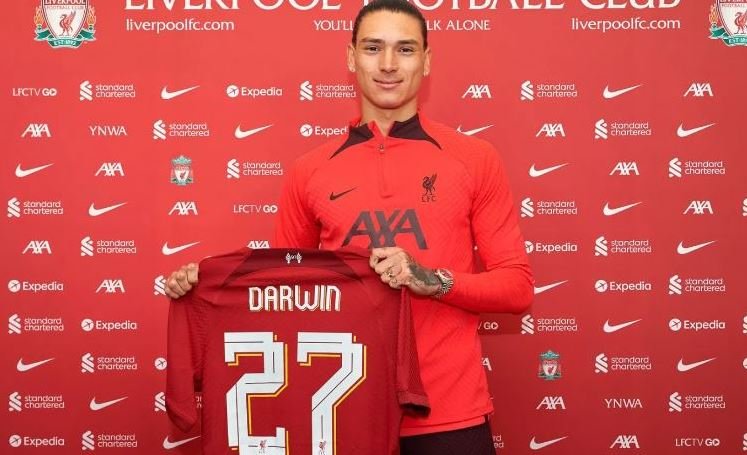 Darwin Nunez has signed a 6 year deal at Liverpool

Darwin Nunez has joined Liverpool from Benfica for a club-record sum of £85 million, with the Uruguay striker signing a six-year contract.

A work permit and foreign clearance are required for the deal to go through.

Last season, the 22-year-old scored 34 goals in all competitions for Benfica, including goals in both legs of the club’s Champions League quarter-final loss to Liverpool in April.

Nunez’s £64 million upfront cost will increase to £85 million if he meets a number of criteria stipulated in his contract, which include scoring goals and winning the Champions League.

“I’m really happy and delighted to be here at Liverpool. It’s a massive club,” Nunez told Liverpool’s club website. “It’s a pleasure to be here in Liverpool and I’m very happy to be a part of this great club.

“I’ve played against Liverpool and I’ve seen them in lots of games in the Champions League, and it’s my style of play. There are some great players here and I think it’s going to suit how I play.

“As I say, I’ve watched quite a lot and it’s a very big club and I hope I can give everything that I’ve got in order to help the team.

“That’s one of the reasons why I came here to Liverpool – to win trophies and titles. I want to win a lot of trophies at Liverpool.”

Manchester United, Newcastle United, and many other European clubs were allegedly interested in signing Nunez this summer, but Liverpool moved quickly to secure the big-money transfer for their No. 1 target.

And it might also clear the way for Sadio Mane to join Bayern Munich this summer, with the Senegalese international having only one year left on his current contract at the club.

Liverpool had previously turned down two approaches from the Bundesliga club for the 30-year-old, the second of which might be worth £30 million.