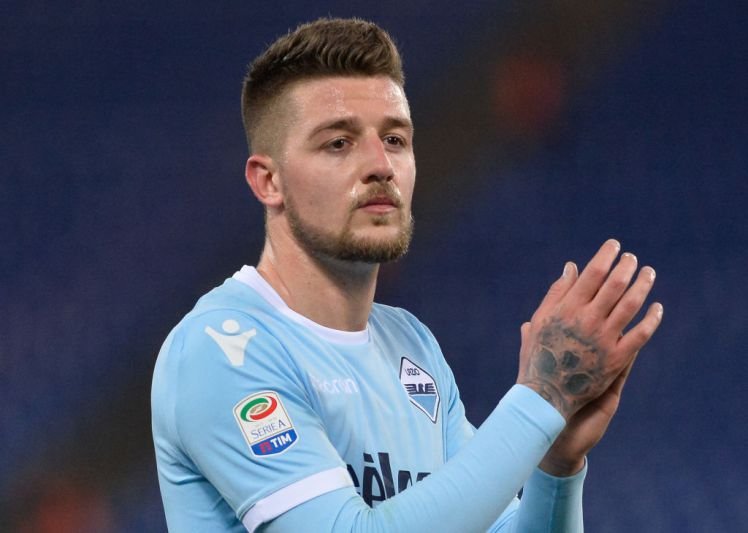 Arsenal are willing to pay more than £42m for Lazio’s Serbia midfielder Sergej Milinkovic-Savic, although Newcastle could also bid for the 27-year-old. (Corriere dello Sport – in Italian)

Paul Pogba has not completed a free transfer from Manchester United to Juventus yet as the France midfielder, 29, is waiting to see if Zinedine Zidane is appointed Paris St-Germain coach. (RMC Sport – in French)

Sevilla say France centre-back Jules Kounde is looking to leave the club this summer, with Chelsea expected to sign the 23-year-old. (Sport Witness)

Arsenal are set to announce the signing of 19-year-old Brazilian forward Marquinhos from Sao Paulo on a five-year contract for about £3m. (Guardian)

Meanwhile, Arsenal are among the clubs considering a move for Leeds United‘s Raphinha this summer, with Barcelona, Manchester United, Chelsea and Liverpool having also been linked with the Brazil winger, 25. (Telegraph – subscription required)

Arsenal striker Eddie Nketiah’s contract runs out at the end of June but the Gunners remain in talks with the 23-year-old English forward after offering him a new deal. (Evening Standard)

Jules Kounde has been a target for Chelsea

Liverpool have yet to agree a fee for Benfica‘s Darwin Nunez, but the 22-year-old Uruguay striker has already told friends and family he is moving to Anfield. (Liverpool Echo)

New Chelsea owner Todd Boehly’s relationship with Jay-Z’s Roc Nation Sports could be key to the future of Romelu Lukaku, 29, and the Belgium striker’s hopes of a return to Inter Milan. (Telegraph – subscription required)

Inter have still not made direct contact with Chelsea over the possibility of re-signing Lukaku. (Fabrizio Romano on Twitter)

AC Milan have backed away from signing Dutch defender Sven Botman from Lille after Newcastle increased their offer for the 22-year-old. (Sky Sport Italia, via Football Italia)

Senegal centre-back Kalidou Koulibaly, 30, wants to leave Napoil to join Barcelona but will join up with the Serie A side for pre-season if the Spanish side fail to get a deal done. (Sport – in Spanish)

Brentford have made an official approach to Italian side Bologna for 20-year-old Scotland defender Aaron Hickey, who is also attracting interest from Napoli, Arsenal, Newcastle and Aston Villa. (Mail)

Hellas Verona are set to take up their purchase option on former loanee Giovanni Simeone and then sell the Argentina striker, with West Ham and Arsenal interested in the 26-year-old, who is currently at Cagliari. (AS – in Spanish)

Sporting Lisbon‘sJoao Palhinha remains a key target for Wolves this summer despite Fulham’s interest in the Portugal midfielder, 26. (Mail)

Tottenham have agreed a deal to buy Middlesbrough’s Djed Spence, who was on loan at NottinghamForest last season, with the fee for the 21-year-old English right-back about £20m. (Guardian)

Rangers want up to £25m for Calvin Bassey and Aston Villa could use 20-year-old English striker Cameron Archer, who was on loan with Preston last season, as a makeweight in a deal for the left-sided Nigeria defender, 22. (Birmingham Mail)

Miguel Almiron’s agent does not think the Paraguay midfielder, 28, will leave Newcastle this summer despite an expected squad overhaul. (Chronicle Live)

Liverpool have opened talks with Naby Keita over a new contract for the Guinea midfielder, 27. (Football Insider)

Manchester United have offered fresh terms to Martin Svidersky but the Slovakia Under-21 midfielder, 19, is still set to depart. (Evening Standard)

Wales forward Gareth Bale says he will not be joining Getafe after leaving Real Madrid this summer and the 32-year-old will make a decision on his future after his country’s latest Nations League fixtures. (The Athletic)

Christensen and Drinkwater among four released by Chelsea