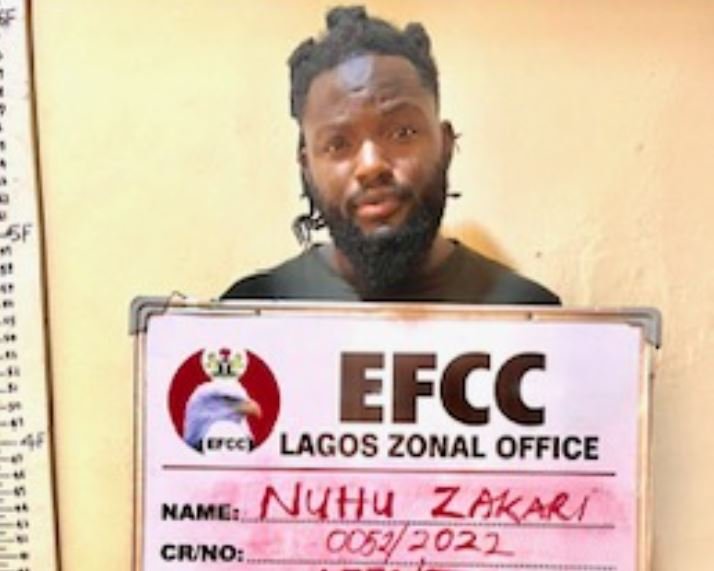 The Lagos Command of the Economic and Financial Crimes Commission, EFCC, on May 31, 2022, secured the conviction and sentencing of one Nuhu Zakari, who was arraigned on a one-count amended charge bordering on money laundering and internet fraud before Justice Sherifat Solebo of the Special Offences Court in Ikeja, Lagos.

He was accused of acting as a middle man, who sourced for foreign bank accounts for other internet fraudsters.

He pleaded guilty to the amended charge.

Thereafter, the prosecuting counsel, G.C. Akaogu, informed the Court that the defendant approached the Commission seeking a plea bargain, which necessitated the amended charges.

While giving a review of the facts, Akaogu told the Court that the defendant was arrested sometime in January, following an operation conducted by operatives of the EFCC based on intelligence reports on the activities of suspected internet fraudsters around the Ajah area of Lagos State.

“He was arrested along with some others and brought to the office of the EFCC for further interrogation and investigation,” he said.

He also told the Court that the defendant, upon interrogation, confessed to “acting as an intermediary between two fraudsters, in which he collects bank details of foreign banks” from one party to another.

He further told the Court that upon his arrest, an iPhone 7, a Huawei phone and a HP laptop were recovered from him and forensically analysed.

The prosecution counsel also told the court that fraudulent documents were printed out from the WhatsApp conversation on his phone.

He, thereafter, tendered in evidence the items recovered from him along with his statement, which were admitted as exhibits against him.

He urged the Court to adopt the plea bargain agreement between both parties.

The defendant, in the open court, admitted the facts against him, and pleaded with the Court to temper justice with mercy.

Justice Solebo found him guilty as charged and sentenced him to six months at a custodial facility.

The Judge also ordered all the items recovered from him to be forfeited to the Federal Government.

He is to enter into a bond with the EFCC never to engage in such an act again upon his release from prison.

We are ahead, says Osinbajo after APC screening