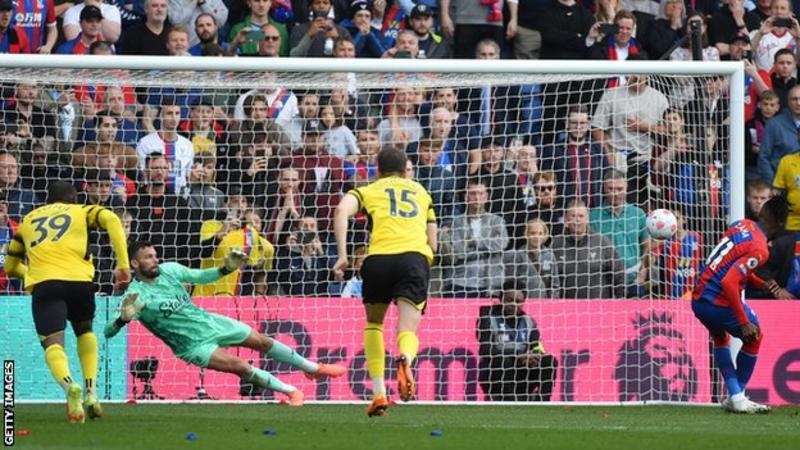 Watford have been relegated from the Premier League after Wilfried Zaha’s first-half penalty secured a deserved victory for Crystal Palace at Selhurst Park.

Defeat by Burnley last week had left the Hornets 12 points adrift of safety with four games remaining and Palace sent their former manager Roy Hodgson’s side straight back down to the Championship with a dominant display.

The Eagles controlled the contest from the outset and went ahead when Zaha confidently swept his 31st-minute spot-kick past Ben Foster after Hassan Kamara had used his arm to block Michael Olise’s back-post header.

Watford never looked like scoring and their misery was compounded when Kamara, already booked for that handball, was dismissed when his push on Olise produced a second yellow card.

It is the second time Watford have dropped out of the top flight in the past three seasons. The manager-less Hornets also went went down on the final day of the 2019-20 campaign before securing an immediate return under Xisco Munoz.

The identity of the coach who will be tasked with emulating Munoz’s achievement is still unknown, however, with Hodgson set to retire from top-level management when his contract at Vicarage Road expires at the end of the season.

Roy Hodgson was brought in to salvage Watford

Relegation represents a bitter final chapter in 74-year-old Hodgson’s managerial career, which has included spells at 17 clubs – including Palace – in eight countries, plus four international sides over 46 years.

Palace’s win – which takes them to within five points of their highest-ever tally in a Premier League season – confirmed what many Watford fans had already accepted after last week’s loss to fellow strugglers Burnley.

While they briefly boosted their survival hopes with victory at Southampton in March, a fourth Premier League relegation was effectively sealed with a run of five straight defeats before the trip to Selhurst.

Graham Scott pointed to the spot, and while Kamara claimed Olise had pushed him in the back, a VAR review upheld the referee’s decision, allowing Zaha to add to the double he netted in Palace’s 4-1 win over Watford in February.

While Watford needed to score twice, it was Palace who looked like grabbing the game’s second goal with Odsonne Edouard almost netting a superb solo goal just after the hour, dancing his way through the visitors’ defence before hitting the post from a tight angle.

With Kamara sent off on 68 minutes, Palace cruised to victory as the game – and Watford’s stay in the division – ended with a whimper.