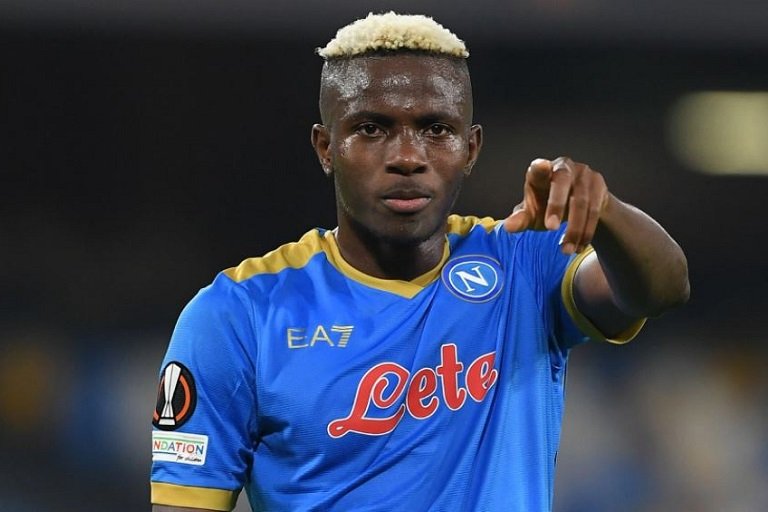 Napoli has repeatedly said that they won’t sell Osimhen for less than £100m.

Kylian Mbappe is on the brink of signing a two-year contract extension with Paris St-Germain worth £42.5m a year, plus an £85m signing-on fee for the 23-year-old France forward. (Le Parisien – in French, subscription required)

However, Mbappe’s mother says her son is continuing talks about his future with PSG “in great serenity”. (Mirror)

Manager Pep Guardiola will sign a new deal with Manchester City to keep him at the Etihad until 2025 after telling the club he is more determined than ever to win the Champions League. (Star)

Manchester City are considering a move for Barcelona’s Dutch midfielder Frenkie de Jong, 25, as they look to build their squad for next season. (Mail)

Everton are prepared to sell Jordan Pickford, 28, to fund a summer rebuild. Tottenham and Newcastle are monitoring the England goalkeeper’s situation. (Talksport)

Meanwhile, both Spurs and Leeds are interested in Wolves and Spain winger Adama Traore. The 26-year-old is currently on loan at Barcelona but the Spanish giants are not expected to sign him permanently. (Team Talk)

England midfielder James Ward-Prowse is believed to be courting interest from Premier League clubs but Southampton boss Ralph Hasenhuttl insists the 27-year-old will be staying at Saints. (Southern Daily Echo)

Uruguay striker Edinson Cavani, 35, says he would have considered leaving Manchester United last summer if he had known the club were going to sign Portugal forward Cristiano Ronaldo, 37. (ESPN Brazil – in Portuguese)

Arsenal and Manchester United target Paolo Dybala has had an offer to join Borussia Dortmund when the 28-year-old Argentina forward’s Juventus contract ends in the summer. (Corriere dello Sport – in Italian)

RB Leipzig want Manchester United target Christopher Nkunku, 24, to stay for one more season on an improved contract, with the Bundesliga club prepared to accept the France forward leaving in 2023. (Bild – in German)

Marcus Alonso’s six-year stint with Chelsea will end this summer with the 31-year-old Spanish left-back prioritising a move to Spain, where Barcelona are interested. (Fabrizio Romano)

Italy centre-back Giorgio Chiellini, 37, will head to the MLS when he leaves Juventus at the end of the season. (Goal)

Sporting Lisbon have triggered the buy option for Manchester City’s on-loan Spanish right-back Pedro Porro, 22, who will complete a permanent deal with a buy-back clause for City. (Fabrizio Romano)

Arsenal right-back Hector Bellerin, 27, will complete a permanent move to Real Betis for a fee of between £5m-£10m, after a successful loan spell and Copa del Rey victory with the Seville club. (Charles Watts)

West Ham have made a second approach to Leeds and Brazil winger Raphinha, 25, despite Barcelona being firm favourites to sign him. (Sport – in Spanish)

Contract talks between Leeds and their sought after pair of Raphinha and England midfielder Kalvin Phillips, 26, are on hold until the Yorkshire club know their fate in their Premier League relegation battle. (90 Min)

Newcastle are ready to offer Atletico Madrid 25m euros (£21m) to acquire Brazil left-back Renan Lodi ahead of Juventus who are also tracking the 24-year-old. (Tutto Mercato – in Italian)