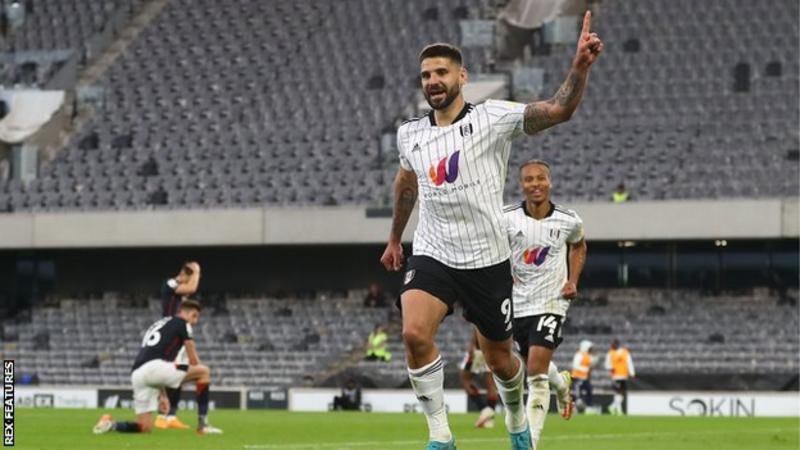 Record-breaking Aleksandar Mitrovic reached 43 goals in a season by scoring twice as Fulham clinched the Championship title in style with a 7-0 win over Luton Town.

Tom Cairney scored the team’s 100th goal of the campaign with a thunderous first-half strike and a thumping long-range shot from Kenny Tete doubled the tally, as Luton crumbled under injuries and Fulham’s dominance.

Fabio Carvalho made it three after the break, before Mitrovic scored his record-equalling 42nd goal of the campaign.

Bobby Decordova-Reid and Jean-Michael Seri extended the lead, before Mitrovic tapped in his second to set a new record for English league goals in a season post-1992 and Fulham’s title celebrations began.

The defeat was Luton’s heaviest of the season and sees them drop down a place to sixth. While a place in the play-offs is still in their hands, they need to beat Reading to ensure Middlesbrough cannot overtake them.

Having confidently dominated the season, Fulham seemed to stutter towards the finish line and went into the game having won only one of their previous five matches.

The Hatters started brightly and where Fulham were misfiring in the final third, Luton looked sharp with Kal Naismith forcing an early save from Marek Rodak.

Yet an omen for Luton’s evening seemed to come before kick-off when Nathan Jones was forced to make a late change after Allan Campbell was injured in the pre-game warm-up.

Tom Cairney celebrates after opening the scoring for Fulham

The injury list grew longer when Fred Onyedinma pulled up running on the counter and he was still sitting on the ground when Harry Wilson picked out Cairney and the Fulham stalwart sent the ball rocketing into the net.

Tete then made it 2-0 with an impressive strike into the corner with his weaker left foot and from that point on it was just a case of how many they would score, with the home fans began cheering every Fulham pass after the break.

Wilson, whose tally for assists this season now stands at 20, flicked the ball on for Carvalho who curled it in for their third.

And Mitrovic had the black and white scarves waving again when he ran into space from deep, saw his first shot blocked but tapped the rebound into the net to match Guy Whittingham’s 1992-93 record of 42 goals in a season.

Luton were still trying to regroup when Decordova-Reid ruthlessly made it 5-0, running between two defenders and slotting the ball beyond Matt Ingram.

Ingram was drafted in by Luton in an emergency loan just 24 hours before kick-off, but having already lost to Fulham twice for parent club Hull City, he has now seen 10 goals by the London club go past him this season.

Seri scored his first goal of the season with another powerful shot from distance low into the corner, before Mitrovic added a seventh in injury time to become the most prolific scorer of a single campaign in the modern era.

Fulham have now scored 106 goals and are just two away from matching Manchester City, who were the last team to surpass 100 goals in English football’s second tier with 108 in 2001-02.

They face Sheffield United away on the final day of the season, while sixth-placed Luton now find themselves among four clubs vying for the final two play-off places – with their goal difference now inferior to Middlesbrough and Millwall, the two clubs immediately below them.

A first league title in 21 years
Fulham first moved to the top of the table in early August and have been at the summit since 20 November, apart from one slip when Bournemouth briefly overtook them.

Promotion to the Premier League is nothing new for a team that have yo-yoed between the divisions the past five seasons.

But this is the first time Fulham have won a second-tier title since Jean Tigana’s side did so in 2000-01. The Frenchman guided them to the top flight for the first time in 33 years in his first year at the helm.

The former midfielder revolutionised the team’s playing style and preparation and it produced wonders on the pitch, as they racked up 101 points.

Their tally of 90 goals was well-short of the 106 Fulham have now scored this season, but while the class of 2021-22 has the unstoppable Mitrovic, Tigana’s team had Louis Saha, who found the net 27 times, with Barry Hayles and Luis Boa Morte contributed 18 each.

Fulham wrapped up a promotion that had long seemed inevitable on 19 April, with a 3-0 win over Preston North End. Yet a draw with second-placed Bournemouth and defeat by Nottingham Forest meant the champagne was on ice when it came to them matching Tigana’s champions.

The demolition of Luton finally put Fulham out of Bournemouth’s reach and crowned a season to remember.

“The aim to be champions was always inside our dressing room. We knew what we wanted from the first day.

“It started to feel in October and November that we had been so dominant, we had to finish in this way.

“To score 106 goals is an amazing achievement for us and it’s fantastic to see players growing with every match.

“The record of Mitro is fantastic and it was the best way to finish this game, the second from him.”

“It was a tough game to watch but they’re the best team in the league so congratulations to them.

“We’ve got nine first-team injuries. What we have to do is make sure we dust ourselves off and make sure we’re ready to go at the weekend.

“It all boils down to one giant, mammoth, unbelievable game (against Reading) and we’d have all taken that at the beginning of the season.

“Let’s look forward to that, rather than dwell on a poor performance – they were good, but we weren’t aggressive, didn’t defend our box well and in the end felt a bit a sorry for ourselves.”