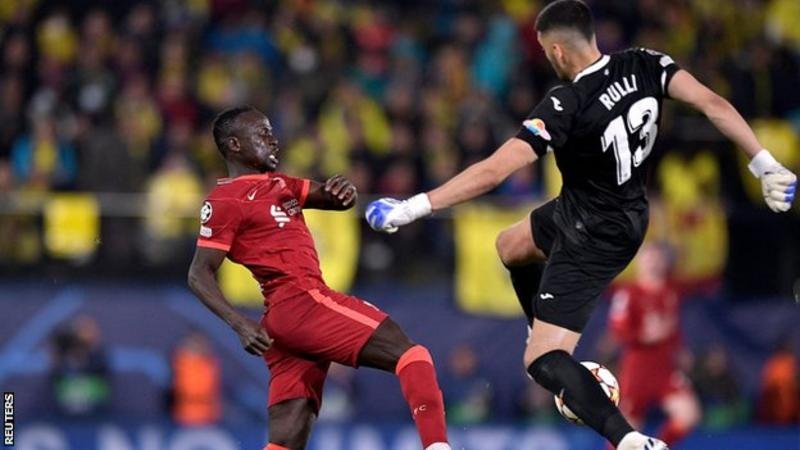 Liverpool survived a scare against Villarreal to move into the Champions League final – and keep their hopes of winning an unprecedented quadruple alive.

The Reds had comfortably won 2-0 in the first leg but that advantage was wiped out after only 41 minutes at a noisy and passionate El Madrigal as the Spanish side pushed for a huge upset.

Liverpool had to improve in the second half and Fabinho put them back in front on aggregate with a shot that went through the legs of Villarreal goalkeeper Geronimo Rulli in the 62nd minute.

Luis Diaz, whose introduction at half time changed the game after he replaced Diogo Jota, restored Liverpool’s two-goal aggregate advantage with a header at the back post.

Sadio Mane secured Liverpool’s place in their third Champions League final in five seasons with a third goal after taking the ball around Rulli. Villarreal ended the game with 10 men with Capoue sent off late on for two bookable offences.

The Reds will play either Manchester City or Real Madrid at the Stade de France in Paris on Saturday, 28 May.

No English side has ever won the Champions League, Premier League, FA Cup and League Cup all in the same season, with Liverpool aiming to create history.

Liverpool suffer, but get the job done

Villarreal’s performance in their 2-0 loss at Anfield led one English radio pundit to call the Spanish side a “disgrace” and “pathetic”, despite an incredible run that had seen them eliminate former winners Juventus and Bayern Munich in the previous two rounds.

However, Reds boss Jurgen Klopp knew the tie was not over and warned his side they “would have to be prepared to suffer” in the second leg.

And suffer they did in arguably Liverpool’s worst half of football this season, with passes misplaced, errors made and the side looking uncharacteristically vulnerable.

They made the worst possible start, conceding after only three minutes.

Pervis Estupinan, who scored an own goal at Anfield, provided a cross which was pulled back by Capoue and Dia, inside the six-yard box, reacted quickest to convert from close range.

Dani Parejo shot just wide and Gerard Moreno had an effort blocked before Villarreal, seventh in La Liga and managed by ex-Arsenal boss Unai Emery, made it 2-2 on aggregate thanks to Coquelin’s fine header.

Liverpool had to improve in the second half, and Trent Alexander-Arnold’s shot hit the crossbar after taking a huge deflection off Coquelin.

But the breakthrough came with Fabinho’s strike and that led to a capitulation from Villarreal, who conceded three times in a 12-minute spell. Diaz headed in Alexander-Arnold’s cross to give the visitors some breathing space before a rash decision from Rulli saw him sprint off the line with Mane getting there first and finishing into an unguarded goal.

Liverpool’s progress keeps them on course to become the first English side to complete the quadruple.

They already have the Carabao Cup in the trophy cabinet after beating Chelsea on penalties in February and Thomas Tuchel’s side are again the opposition at Wembley for the FA Cup final on 14 May.

This victory means Liverpool have become the first English club to reach the final of the European Cup/Champions League, FA Cup and League Cup in the same season.

Liverpool are also only one point behind Manchester City in the Premier League title race and could meet in the Champions League final later this month.

Pep Guardiola’s side hold the advantage in the second semi-final after an incredible first leg at Etihad Stadium saw them beat Real 4-3 in one of the best games in the tournament’s history.

The second leg takes place at Real’s Santiago Bernabeu stadium on Wednesday and if the Spanish champions, managed by ex-Everton boss Carlo Ancelotti, can turn the one-goal deficit around it would set up a repeat of the 2018 final.

Real won 3-1 on that occasion as Gareth Bale scored twice, including an incredible overhead kick, but the game will largely be remembered for two goalkeeping errors from Liverpool’s Loris Karius.