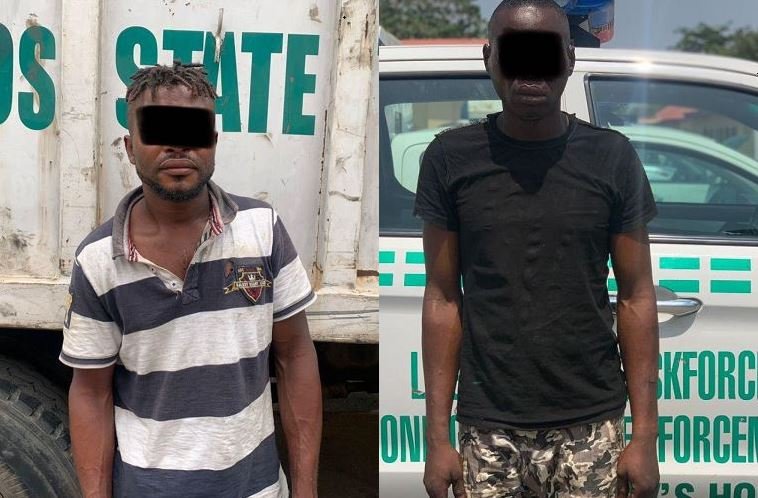 Operatives of the Lagos Taskforce have arrested a suspected serial imposter and Okada thief who specializes in snatching motorcycles and impersonating officials of the agency with his camouflage trousers and wallet in order to dispossess unsuspecting Okada riders of their bikes and valuables in different parts of the state.

The suspect, Elias Marcus, 33, a father of one was arrested midday while he was trying to carry out his usual act of impersonating a Lagos Taskforce official and stealing the bike off a rider.

According to the victim, Yahaya Usman, 19, the suspect flagged down a bike around Mafoluku asking him to take him to the inner parts of Oshodi. On getting to the destination, the suspect asked the rider to divert to a different location where he pushed him off the bike and sped off with it.

“We got to our destination and before I knew what was happening I found myself on the ground after I had been pushed by the suspect. I knew he wanted to steal the bike. He rode off with the bike and I chased him till I caught up with him and struggled with him till officers of the Taskforce came to my rescue and arrested him.” Yahaya narrated.

The suspect confessed to being into the illicit trade of impersonating military and paramilitary officers because it gives him free access on the roads and also some privileges across the country.

“I’ve always wanted to be a force man but when I could not become one I decided to impersonate. It gives me clearance and commands respect for me in some instances that’s why I delved into the business of stealing under false pretense. My wife does not know I am into such a business,” he stated.

Speaking on the incident at the headquarters of the Lagos Taskforce, chairman of the agency, CSP Shola Jejeloye said that he had given his officers express directives to arrest and prosecute anyone impersonating officials of the agency and tarnishing the image of the agency.

“We have made series of arrest in months because the reports of fake Lagos Taskforce personnel we receive is worrisome. We will carry on with this mop up exercise till every single fake official is arrested and taken to court. This will serve as a deterrent to others who might be nursing the idea of impersonation,” Jejeloye stated.

The suspected impostor has been charged to court accordingly, he pleaded not guilty and the case has been adjourned to 26th May 2022. He has been remanded at the Badagry Correctional Centre.

In a related development, officials of the Lagos Taskforce have also arrested a commercial driver who bit the finger of an official of the agency during his arrest and impoundment of his vehicle for driving against traffic (one-way) Along Oshodi-Apapa Expressway.

The suspect, Osinachi Ndukwe, 32, drove against traffic from Oshodi down to Ayoni bus stop along that route to beat traffic which was as result of the road construction going on in that axis.

“I usually complete 8 to 10 trips in a day but because of the traffic construction going on here I decided to drive on one-way all the way down to Ayoni Bus stop. I was frustrated that’s why I had to bite the finger of the official seriously to avoid being arrested,” Ndukwe stated.

The Lagos Taskforce chief disclosed that most motorists try to use road construction as an excuse to break the law but it is not acceptable.

“Commercial drivers always give the excuse of road construction to justify driving on one-way but that is unacceptable in every ramification. Driving on one-way is dangerous and has led to loss of lives on several occasions that’s why we will never condone it. Anyone found driving in that direction will be arrested and he risks having his vehicle forfeited to the state government once found guilty by the court.”

Jejeloye enjoined Lagosians to obey traffic rules and regulations no matter the level of construction going on as doing so will promote orderliness and safety on Lagos roads. “Driving against traffic is dangerous and irresponsible and should be frowned at at all levels,” the Lagos Taskforce chief said.