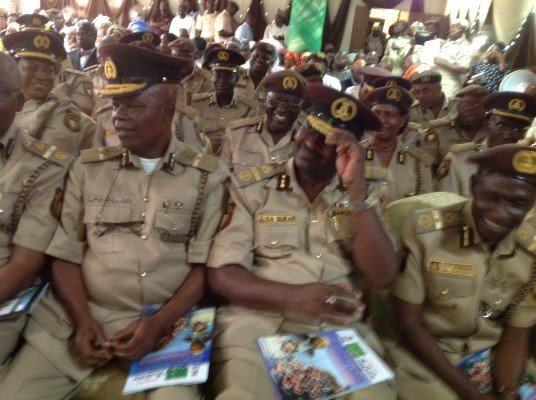 Some Nigerians have decried the current level of poor performance of the Nigeria Immigration Service (NIS) which they attributed to dearth of senior officers to man sensitive positions in the organisation.

They made the criticism while recounting their experiences to the News Agency of Nigeria (NAN) in Abuja.

One of them was a Nigerian, who returned from Europe to renew his international passport, which had some two months to expire.

The respondent, who simply called his name Ibrahim, expressed sadness with the frustration he experienced in the service Headquarters to renew his passport yet could not be attended to.

He said after struggling to obtain his National Identification Number (NIN), a precondition for the passport renewal, the service said he could only apply for the document and return in two weeks for image capturing.

The Diaspora Nigerian told NAN that he felt embarrassed that an office which was dealing with citizens with international exposure could be talking about staggered processes in the issuance of passports.

“This office is toying with the future of its citizens if it fails to issue travelling documents promptly on request; is it that it does not have the manpower to carry out its primary responsibility.

‘’Nigerians abroad chose to return home to update their documents as most of the times the passport booklets are not available in their countries of residence.

‘’NIS prefers to issue temporary travel permits for a foreign-based applicant to come home even after the person had paid a fee that is higher than the main passport booklet.

Visits to some passport processing offices of the service showed that a lot of applicants turned up and would spend the whole day without success.

NAN reliably gathered from some Nigerians during interview that apart from the passport booklets supplied not being enough to meet demand, some officers who could be reported to did not exist.

Some Immigration officers reported that the top level management of the Service was depleted due to the steady retirement of personnel and withholding of recent promotion interview conducted to fill the gaps.

NAN learnt that the promotion examination carried out since 2021 was hanging in the Service board’s office.

NAN gathered that of the eight Deputy Comptrollers-General heading eight directorates of the service, only two remained in service while six had retired since 2021.

The sources alleged that there was no sign that the Board of Civil Defence, Correctional, Fire, and Immigration Services, saddled with the responsibility to fill the gaps, was in a hurry to do so.

“As it is, apart from Account/Finance and Visa/Residency Directorates, the rest directorates are headed by Assistant Comptrollers-General against the provisions of the Nigeria Immigration Act.

“Most of the seven zonal offices have virtually shut down owing to the unavailability of Assistant Comptrollers-General to man them.

“At the moment only Zone A Lagos, Zone B Kaduna, Zone E Owerri, and Zone G Benin are functional. Zones C Bauchi, Zone H Markurdi, and Minna are comatose,” they alleged.

NAN also gathered that there were also no comptrollers at most of the zones whereas each of the zones is expected to have a minimum of three comptrollers, one of which should take charge in the absence of the Assistant Comptrollers General.

“The remaining ones are retiring very soon after waiting in vain for the release of the promotion,” a source said.

Our source also blamed the board for allegedly politicising the promotion process.

Other respondents blamed two Commissioners of the Board, Alhaji Ado Jafaru, a former Assistant Comptroller-General, and a certain retired Major-General Bassey for allegedly being interested in new recruitments.

They alleged that both commissioners were interested in upgrading their cronies instead of caring for existing officers.

NAN gathered that there was also the problem of a leadership tussle in the immigration service where some officers blamed the board for preferring overaged officers to lead the service.

According to them, instead of appointing younger persons as Comptroller-General of the service the board rather preferred to extend the tenure of retired Comptrollers-General for alleged personal gains.

The authorities were also accused of deliberately frustrating qualified officers while waiting for their cronies to attain promotion age.

“This has resulted in frustration and low morale among the officers of the service.

“The service is also now polarised along ethno-religious lines. This determines both recruitments into the service and postings especially to foreign missions and Passport Control offices.

“During the last recruitments exercise such consideration became the criteria for appointments leading to denial of chances to applicants from some states.

“For instance, an investigation showed that while certain states from ‘privileged’ geopolitical zones had over 500 per state, others were merely given 60 slots or thereabout.

“Most sections in the headquarters are presently being headed by Deputy Comptrollers instead of Assistant Comptrollers General.

“Human Resources Directorate that should have six Assistant Comptrollers-General now have only one, ACG (APD), while a very important section like Training and Staff Development has a Deputy Comptroller in charge,” the sources said.

Some staff members claimed that there were speculations that some top ministry officials and the Board were contemplating transfer of service to fill existing vacancies instead of promoting qualified officers.

“They want to bring in their cronies and relations from outside the service to fill up the existing vacancies.

“The immigration Command and Staff College, Sokoto has no substantive Commandant because there is Assistant Comptroller General to be so appointed,” they said.

When contacted, Service’ Public Relations Officer Amos Okpu, ACI, Headquarters, told NAN that the issue of promotion was the Board’s responsibility as the service had little or nothing to do to that effect.

The Secretary/Director of the Board, Aisha Rufai, in a telephone interview told NAN that she was indisposed to comment on the issues raised by the sources.

One of the Commissioners on the Board ACG Ado Jafaru told NAN on telephone that the board was handling more than 30,000 candidates involved in the promotion interview.

He, however, said the issues raised were not ones to be resolved in the media and advised those aggrieved to do a formal report through the proper channel to the board. (NAN)

CAN calls for 3 days prayers for Nigeria