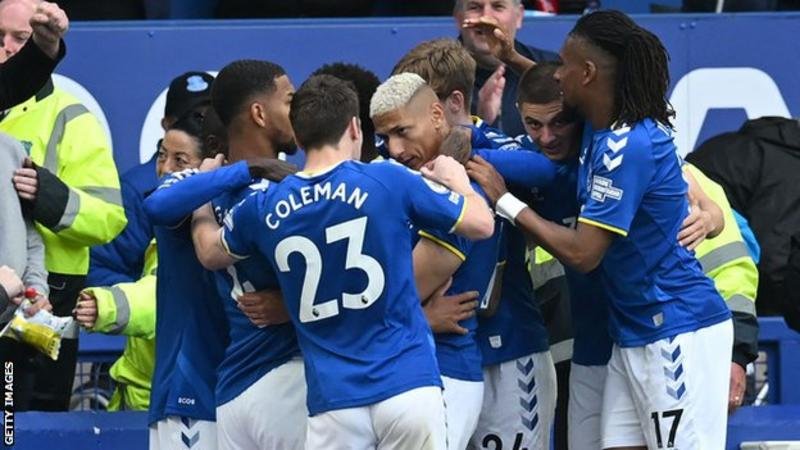 The Brazilian was gifted the chance as Cesar Azpilicueta dallied on the ball, allowing him to steal in and finish calmly.

The win moves the Toffees to within two points of Burnley in 16th and Leeds in 17th, with a game in hand on both.

If Everton and their fans were attempting to rattle their opponents, it worked, for what could prove to be a crucial step towards safety.

With so much at stake, once again the supporters helped boost a struggling but spirited team to earn a third win in four home matches, which will be key to their chances of survival.

Chelsea’s build-up had been disrupted, with midfielder Jorginho admitting he was woken by the fireworks outside the Chelsea hotel on Saturday night.

Before kick-off, thousands of Everton fans lined the streets outside Goodison Park, attempting to lift the mood that had been dampened by relegation rivals Burnley’s 2-1 victory at Watford on Saturday.

And in a full-blooded match, that noise helped set the tone as the hosts tore into their opponents with an aggression which was met with approval from their fans.

At times, it spilled over. Fabian Delph was fortunate not to go in the book for a foul on Jorginho, and then did shortly before half-time with a late challenge on Mount.

Seamus Coleman and Yerry Mina, back in the side, unsettled Azpilicueta, who was also booked after taking issue with Everton’s Colombian defender. Tuchel was furious with some of the treatment handed out to his players on his first visit to Goodison Park.

The football on show was limited in the first half, but it did not deter from a raucous occasion.

Mount curled an effort over after eight minutes. Loftus-Cheek, who replaced N’Golo Kante in midfield, made some dangerous runs from deep, and Gordon was a lively presence, shooting wide of the near post with a left-footed effort.

But no sooner had fans taken their seats for the second half, Everton went ahead and it was a goal made as a result of their tactics.

Azpilicueta dawdled on the edge of the penalty box, allowing Richarlison to pinch the ball from him, receive it back from Gray and slot in at the Gwladys Street End to send the stadium into ecstasy.

But around the hour mark, the home fans were rewarded with more good defensive play from their team, which was cheered as strongly as if Everton had scored.

Mount’s initial effort somehow stayed out after he hit both posts, before Pickford produced the first of two miraculous saves, firstly to deny Azpilicueta who had the goal at his mercy.

Following that commotion, and with Chelsea desperately searching for an equaliser, the game opened up, leading to further chances for Gordon and Richarlison.

Pickford was called into further action to deny Loftus-Cheek. But after seven minutes of stoppage time, the relief and delight inside Goodison was almost tangible as Lampard and his players celebrated a famous win.