Consultation with the people critical to good governance - Osinbajo
Advertisement 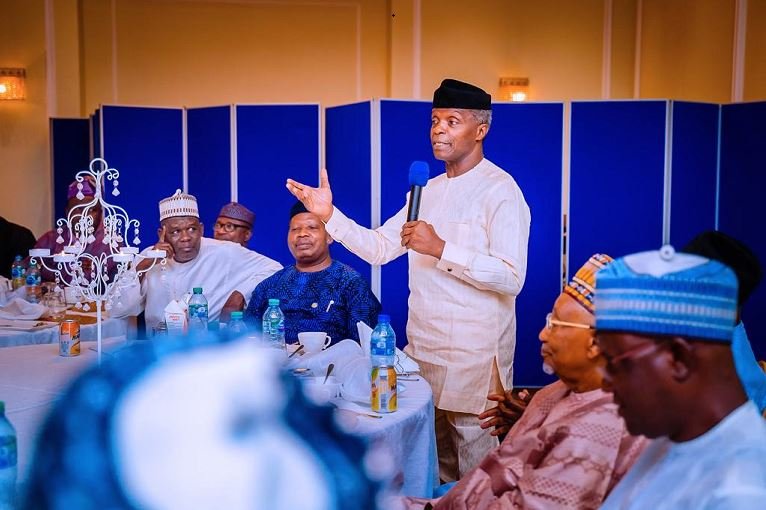 Vice President Yemi Osinbajo says consultations with the people is critical in governance and important for national development, especially in a country as diverse and complex as Nigeria.

Prof. Osinbajo, who was speaking at his official residence at the Presidential Villa Sunday evening during a dinner with Speakers and Deputy Speakers of a number of State Houses of Assembly, stated that “government by partnership is so important.

“That is the kind of relationship that I think makes governance easier. The only way to make a complex country like this work is by consultations. There is no other way,” the VP declared.

The Vice President also stated that he would apply this partnership model in governance if he was nominated by the All Progressives Congress (APC) as its presidential flagbearer, and is elected as President of Nigeria.

He also restated the value of his experience to lead Nigeria as President in 2023.

Osinbajo noted that, “In terms of training on the job, I think I am quite well trained. So, I believe very strongly that, although there are other contestants who are also very capable and competent, I believe that just in terms of readiness, I think that if there is anyone who is prepared for that, I am certainly that person.

“So, if by the grace of God, I am nominated by the party and the electorate, I think that God helping us, we will be able to do much in office. And one of the very important things for me is what I would describe as a partnership.”

While interacting with the visiting speakers and their deputies from across the country, the VP recalled his tour of the Niger Delta in 2017, on behalf of the President, which birthed the administration’s Niger Delta New Vision, and restored peace and stability, among other significant development gains in the region.

Osinbajo added, “That engagement taught me something very crucial, the most important thing of all in this country, is for us to be able to sit down and talk on any issue. People want to be able to express their views, and they want to be heard/helped, and we must create the time to hear them and understand their views.

“Whatever policy that is, engagement is always the best approach, I think that has succeeded in so many instances. I am confident that the partnership model is one that will always work.”

Osinbajo also highlighted the partnership relationship between the Presidency and the 36 State Governors despite party differences, and how it led to President Muhammadu Buhari approving bailout to States to pay workers’ salaries, budget support facilities, Paris Debt refunds among other packages from the Federal Government in the past years.

According to him, “the reason why we were able to, from day one, without discriminating along party lines, why we were able to ensure that all sides of this outstanding salaries were paid as soon as we got into office was just because we had established that (partnership) from day one. So, the governors were able to come to us to say there is a problem here, how do we solve it?

“The special packages that we put together for the States were on the basis of a partnership, we all worked together to ensure that there is success all round. I think that the governors would testify that that partnership model is a model that has worked.”

Similarly, Prof. Osinbajo noted that this partnership has also helped in the cordial working relationships with all the States governors under the auspices of the National Economic Council (NEC) which the VP chairs.

In their remarks, the Speakers and Deputy Speakers commended the Vice President for his efforts in the Buhari administration and in the general development of the country, while many of them endorsed his aspiration to become president in 2023.

Pledging his support for the VP, Speaker of the Niger State House of Assembly, Hon. Abdullahi Wuse, noted that the VP has the best capacity to lead from 2023.

In the same vein, Ogun State House of Assembly Speaker, Olakunle Oluomo, noted that Nigerians everywhere appreciated Prof. Osinbajo, who he said has shown total capacity in leadership. According to him, the country will experience transformation if the VP is elected president in 2023. “His coming will accelerate a lot of development in this country; also he will hit the ground running,” he added.

In a similar vein, the Nasarawa State House of Assembly Speaker, Ibrahim Abdullahi, said, “we appreciate your capacity and intelligence. And we are thankful that we have somebody like Mr. Vice President in this country. We don’t need to be reminded that even Mr. President trusts you so much, and trusts your capacity. You love this country, and we are sure by the time Mr. Vice President takes over from President Muhammadu Buhari, you will start where he ends.

Why Africa countries must collaborate for continent’s development – Buhari