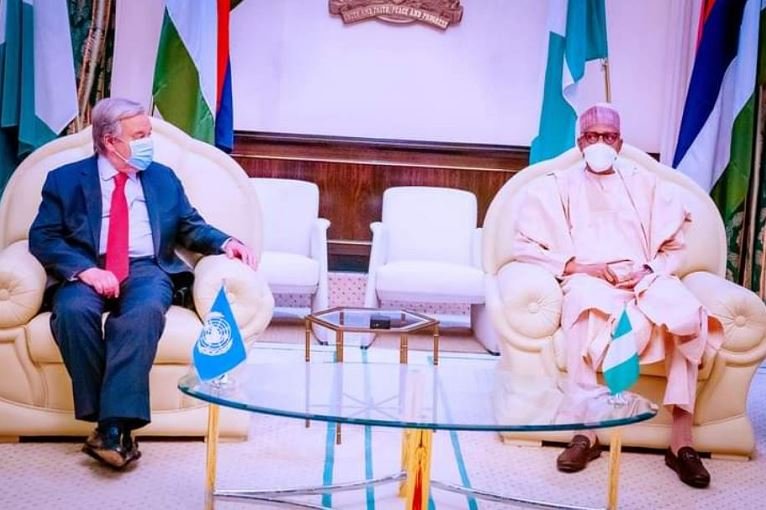 President Muhammadu Buhari has described terrorists as ‘stupid’, noting that, God is a God of justice, so you cannot kill people and say God is great.

Buhari stated this when he received the United Nations Secretary General, Antonio Guterres, to Nigeria, stressing that, the country remains grateful to the UN and some world leaders on their steadfast partnership in fighting terrorism.

The Nigerian leader said that the spotlight on Russia and Ukraine could have easily distracted the world from other pertinent global challenges.

The president’s spokesman, Mr Femi Adesina, in a statement, said the president gave the commendation to the UN Sec Gen at the Presidential Villa, Abuja, on Wednesday.

Buhari noted that the country and the African continent were already concerned that the attention on Russia and Ukraine would crowd out other issues, but the ongoing visit of the UN scribe clearly showed that “the world has not forgotten us”.

According to the president, terrorism remains a threat to global peace, security and progress, with many already killed, while millions have been displaced by the insurgents over many years.

“When we assumed office, the North-East was the major security problem we inherited in 2015, but we have been able to make people understand that you cannot kill people and shout ‘Allahu Akbar’ (God is great!).

“It is either you don’t know what you are saying or you are simply stupid. God is a God of justice, so you cannot kill people and say God is great. Luckily the people understood our message and it has made great impact,’’ he said.

President Buhari told the UN scribe that the government had started a gradual, but steady process of resettlement and reintegration where citizens get encouraged to return to their farms, businesses and other pursuits in life.

He thanked the Secretary-General for the maiden visit to Nigeria.

In his remarks, the UN scribe, who had been in Borno on Tuesday, said what he saw was a departure from the pictures of hopelessness and despair painted, adding that ”people exuded hope.’’

“Yesterday, I visited Maiduguri where the United Nations is supporting the internally displaced. I was deeply moved by their stories and struggles.

“These include the struggles with hunger, with the World Food Programme projecting 4.1 million people in the North East of Nigeria to be food insecure in the upcoming lean season,’’ he said.

Guterres said the United Nations had called for an additional 351 million dollars as part of the overall 1.1 billion dollars for the humanitarian response plan for Nigeria.

“But despite all they have seen and endured, the people I met remain hopeful and committed to returning to their communities and resuming their lives.

”To that end, I welcome the establishment of the Presidential Committee on the Repatriation, Returns and Resettlement of Displaced Persons in the North East.

“This spirit of hope amidst hardship – and solidarity in struggle – was also at the centre of my discussions with the Presidency today,’’ he added.

The UN scribe said discussions with President Buhari also touched on laying groundwork to ensure peaceful and democratic elections in 2023 – and the full participation of Nigeria’s women and young people.

At the media stakeout, the UN Secretary General told newsmen that measures to address security challenges in the country, Lake Chad and Sahel were discussed, which included the UN Integrated Strategy for the Sahel.

Guterres thanked President Buhari for his unwavering support of the Multinational Joint Task Force and the Lake Chad Basin Commission.

He assured of more commitment from the UN on COVID-19 vaccinations, vulnerability of countries to global warming, global food crises response and reform of UN Security Council.

He said the war in Ukraine would make things worse on global food, energy and financial systems.

Gutteres said, “That’s why, in the earliest days of this war, I established the Global Crisis Response Group on Food, Energy and Finance, involving all UN agencies and international financial institutions.

”The Steering Committee is chaired by Deputy Secretary-General, Amina Mohammed.”