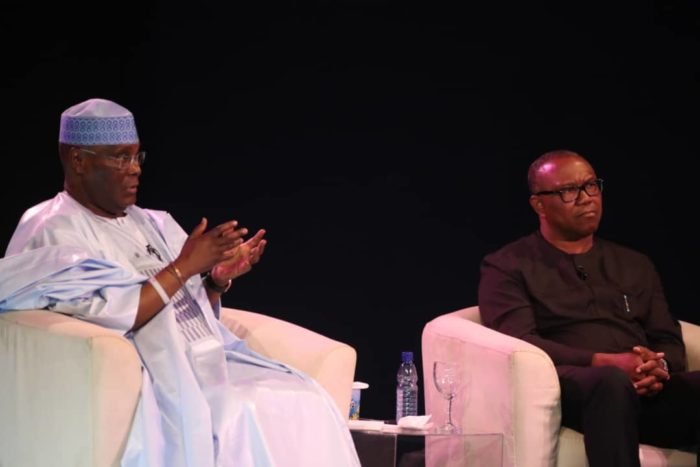 Peter Obi, a former Anambra governor and running mate to Atiku Abubakar in 2019 presidential election has congratulated to latter on his emergence as Peoples Democratic Party (PDP) presidential aspirant.

Obi who described Abubakar as an ‘elder brother’ prayed that God will continue to bless him.

“On behalf of my family, I sincerely congratulate my leader and dear elder brother, His Excellency, Atiku Abubakar, on his emergence as the 2023 presidential flag bearer of the PDP. I pray that the Almighty God who sees your goodness will continue to bless you now and always,” he said in a tweet.

Chronicle NG reports that Obi on May 25 dumped the PDP for Labour Party as he continues his bid to be president of Nigeria.

Okowa in a statement issued by his Chief Press Secretary, Olisa Ifeajika, expressed confidence in Abubakar’s capability to provide needed leadership that would lead the party to accomplish its “Rescue Nigeria” agenda beginning from 2023.

He urged him to, as the face of the PDP in 2023 general elections, bring his political and socio-economic wherewithal to bear on the responsibility.

The governor also charged all aspirants, who participated in all PDP”s primary elections across the country as well as the presidential, and leaders of the party, to close ranks and work for the victory of the party in the general elections.

According to Okowa, if PDP is to win and rescue Nigerians from the All Progressives Congress (APC)-led Federal Government, all hands must be on deck to achieve this mission.

“I congratulate His Excellency, Alhaji Atiku Abubakar, on his emergence as the presidential candidate of our great party at the PDP presidential primaries.

“Now, all former aspirants, leaders and all other stakeholders in our party must come together to liberate our citizens from the shackles of APC and give them a better life and country,” he said.

Okowa, who was Chairman of Accreditation Committee of Convention, also congratulated National Chairman of the party, Sen. Iyorchia Ayu and other stakeholders of the party for conducting a peaceful and successful convention.