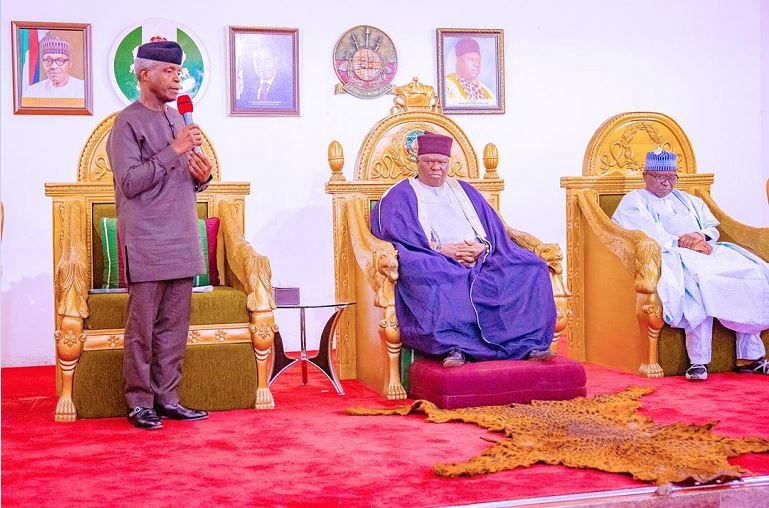 Vice President Yemi Osinbajo has racked up endorsements across Nigeria as he continues his consultations and meetings with stakeholders and delegates of the All Progressives Congress (APC).

Also, yesterday, the Vice President continued his consultations with APC delegates from Abia and Ebonyi (in Owerri, Imo State) and in Sokoto.

“Our party is so fortunate that we have so many well-qualified persons who are running for the position of president. I think that everyone who is running is very well qualified for the job,” the VP stated, after his interactions with Sokoto delegates late last night.

However, the verdict from most stakeholders and delegates, just like on the streets of many state capitals, has been overwhelmingly in favour of Prof. Osinbajo.

Like in every state he has visited so far, this was, again, evident as residents came out in large numbers on the streets of Jos, Owerri and Sokoto, to welcome the Vice President; with the crowd working up a carnival-like atmosphere with their chants, singing and dancing. This was the case, even late in the night around 9pm in Sokoto.

Many of them, youths, waved and hoisted banners and posters of the VP, as his convoy drove through the city, to the palace of the Gbong Gwom Jos and then to the venue of the meeting with delegates, with the VP acknowledging their excited cheers all the way.

Despite arriving in Sokoto late yesterday night due to delays from Plateau and Owerri trips, the patient crowd in the State waited at different stops for the VP. Their excitement reached fever pitch when they saw the VP’s convoy as it drove past the streets, on the way to the Palace of the Sultan of Sokoto, Muhammadu Sa’ad Abubakar III, and the venue of interactions with Sokoto delegates and stakeholders.

“We see you as a partner in progress for the development of our great country. We wish you all the best, and we pray that you convince your delegates that you are the best presidential material to lead this country. We can only pray for you,” the Sultan told the VP when he arrived to pay a courtesy call at the Palace.

The Vice President thanked the Sultan of Sokoto for his counsel and leadership in ensuring the country’s unity.

Also, the APC State Chairman in Sokoto, Hon. Isa Sadiq Achida, noted that having served as Vice President for seven years and acting president at some points, no other candidate has that requisite experience like Prof. Osinbajo.

“Of all the presidential aspirants, the VP stands out with certain particular features that are unique to him. Our Vice President has seen it all. He is tested and trusted,” he said.

Achida added that at this time Nigeria needs a leader with strength of character, a visionary leader, an intelligent person with the requisite capacity like the Vice President.

“On behalf of Sokoto State delegates, we wish to assure you of our complete support and commitment as you vie for the highest office,” he added.

Earlier in the day, the youth in Jos were also vocal with their admiration for Prof. Osinbajo, especially when the VP’s convoy arrived at the venue of the delegates’ interaction.

On arrival at the Jos airport, the Vice President was received by the Deputy Governor of Plateau State, Prof. Sonni Tyoden, who represented the State Governor; as well as other state government officials.

Prof. Osinbajo’s first stop was to pay a courtesy call at the palace of the Gbong Gwom Jos, who is also Chairman, Plateau State Traditional Council, HRH Da. Jacob Gyang Buba; where he officially informed the monarch and members of the Council of his presidential aspiration.

Having served as VP for seven years, Prof. Osinbajo noted that “if I may say so with great humility, I am rather well trained as a potential president of this country.”

Highlighting the critical role of traditional institutions in the country, he added, “I believe that working together, we can truly bring about a more secure, more peaceful, and better country economically.”

“This is a country of great resources; of tremendous potential; this is a country that if we stay united, we can be one of the greatest countries, not just in the continent, but in the world.”

In his remarks, the Gbong Gwom Jos noted that “we have no doubt that you are able and capable, having being VP for seven years. And in your own words, you worked closely with the President. This adds to the fact that you truly know the in and out of governance. We also appreciate the fact that you are aware of the challenges that Nigeria is going through.”

“On behalf of my colleagues, Plateau State Council of Chiefs and Emirs, we wish you the best; and we pray that God in his infinite mercies will give us the best,” the monarch further stated, even as he called for peaceful campaigns throughout the elections.

“From what we know about you, we believe you will be at the head of those championing the calls for a peaceful campaign that will translate into a very peaceful election. And God in his infinite mercy and grace will assign a leader that will truly serve him through serving Nigeria,” the monarch said.

The Deputy Governor of Plateau State also noted that the Vice President “knows the in and out of the government.”

“Like the chairman said, we have other aspirants; but we know that we can separate the chaff from the grains. We know that there is Osinbajo and the rest… you will be the best president Nigeria will have.”

At the meeting, Bature said, “the delegates of Plateau know who you are, they know what you have done, and they will give their votes for you. Other aspirants have come, but the reception has not been this massive.

“All the people you see outside are not just APC, but from other political parties. You have touched the lives of so many people in this country. If there is anything we can do to pay you back, it is by voting you as President of the Federal Republic of Nigeria.”

The Vice President had interactive questions-and-answers sessions with the APC party delegates in the different states, addressing various national issues.

In response to a question on religion in a multi-ethnic and religious country like Nigeria, the VP noted that his highest-ranking staff (Deputy Chief of Staff to the President) is Muslim, while he is Christian and a pastor in RCCG.

Noting that the freedom of worship is enshrined in the country’s Constitution, Prof. Osinbajo said, “people must be allowed to worship God in the way that they want to, it is up to them to determine how they will worship God.”

Just as he noted in the Sultan of Sokoto’s palace, the VP further emphasized on the country’s unity, despite the different tribes and religion.

“I believe that one of the most important things about faith is justice, fairness and merit. Nobody can say that they will disregard merit because of one issue or the other. We must work together. Look at the number of Christians and Muslims that we have in this country; it is important for us to work together to make sure that this country is great.”

“Our faith should help us to serve our country better, it shouldn’t be for discrimination. All the faiths teach the same virtues of honesty, integrity, and truthfulness.

The Vice President also held consultations with Abia and Ebonyi delegates in Owerri, Imo State. Besides party chieftains and stakeholders from those States, the Imo State Governor, Senator Hope Uzodimma, was also in attendance.