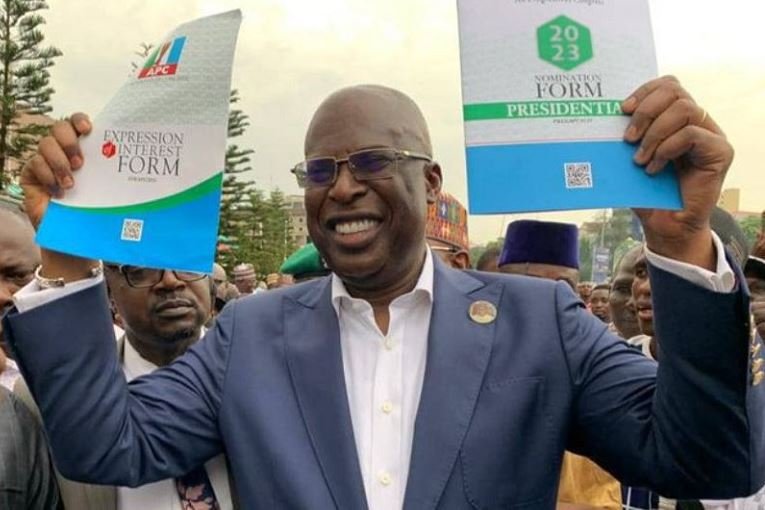 The Northern Solidarity Group on Monday presented the All Progressives Congress (APC) Expression of Interest and Nomination form to Chief Timipre Sylva, Minister of State for Petroleum Resources for 2023 presidential poll.

Speaking at the ceremony in Abuja, spokesperson for the group, Mr Suleiman Abdullahi said the minister has a good chance of getting the APC ticket and winning the presidential election.

He said that the minister needed the support of all Nigerians to emerge as the country’s next president.

“We picked the APC Presidential Expression of Interest and Nomination forms to surprise the Minister State for Petroleum, Chief Timipre Sylva, to contest for the presidency of this country.

“Our decision as his fans from Northern Nigeria is based on the fact that we found him capable to led the country to the next phase.

“Nigerians can see from his antecedent from the state to the federal level that he has garnered necessary experience and well acceptable across the country.

“So we know that his chances of winning the ticket of the APC is brighter,” he said.

Sylva while addressing the group, expressed joy for the love shown to him by Nigerians from all walks of life.

He said he was honoured and humbled by the show of love and commitment, adding that it was however, not for him, but for Nigeria.

“I have tried my best since I was appointed by President Muhammad Buhari to give my service to Nigeria.

“But to realise that my efforts have been noticed by some Nigerians to the extent of taking the trouble of obtaining the expression of interest and nomination forms for me, is very humbling.

“And I must also say very shocking at the same time, but I am very happy and pleased by this gesture,” the minister said.

While expressing appreciation to the group, the minister however, said that he would not give a straight answer to them.

The News Agency of Nigeria (NAN) reports that the APC expression of interest and nomination forms were sold for N100 million for presidential aspirants while governorship aspirants paid N50 million for the forms. (NAN)