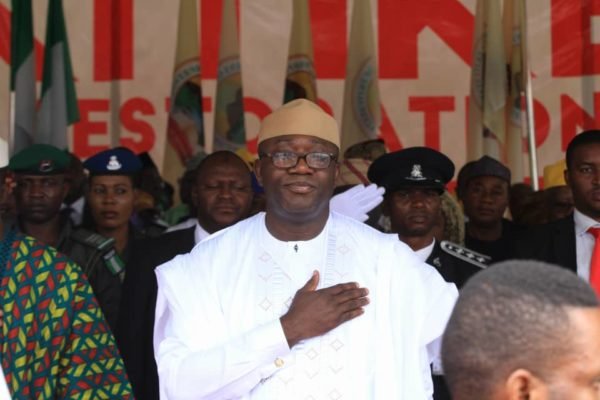 Governor Kayode Fayemi of Ekiti State will formally declare his intention to run for the office of President of Nigeria in Abuja on Wednesday.

The declaration, tagged “Unveiling My Nigeria Agenda”, is the climax of the Governor’s extensive consultations across the geo-political zones in the last six weeks. It will also lay to rest speculations on whether he would run for the Presidency or not.

A statement by Yinka Oyebode, chief press secretary to the governor said Fayemi had discussed his plan to run for the number one office with President Muhammadu Buhari last month, sought counsel, guidance and support from traditional and political leaders across states in the federation.

“Fayemi kick-started the consultation in Owo, Ondo State, where he met with the Olowo of Owo, His Royal Majesty, Oba Ajibade Gbadegesin Ogunoye. Owo is renowned as the seat of progressive politics in the country, being the birth place of the defunct Action Group (AG) led by the late sage, Chief Obafemi Awolowo.

“The Afenifere leaders did a frank assessment of current trends in the country and concluded that the country needs a leader, a democrat with character, courage and compassion at this critical period. They scored Fayemi high on these points and gave their blessings for his aspiration,” the statement said.

“Determined to deepen the consultations, Fayemi also visited the Osemawe of Ondo, HRM Oba Adesimbo Victor kiladejo at his palace in Ondo town and the Deji of Akure, HRM Oba Aladetoyinbo Ognlade Aladelusi at his palace in Akure. The consultation also took him to Ile- Ife, Osun State, the cradle of the Yoruba, where he met the Ooni of Ife, His Imperial Majesty, Oba Adeyeye Enitan Ogunwusi, who accorded him a grand reception that lasted for hours, interspersed with prayer sessions and cultural entertainment.

“Fayemi also met with the Olubadan of Ibadan, HRM Oba Lekan Bbalogun; the Alake of Egbaland, HRM Oba Michael Adedotun Gbadebo; the Awujale of Ijebu ode, HRM Oba Sikiru Adetona; and the Akarigbo of Remoland, who is also the chairman of Ogun State Council of Traditional Rulers, HRM Oba Babatunde Adewale Ajayi in their respective palaces, where he got royal blessings.

“He also visited and had talks with the Sultan of Sokoto, His Eminence Muhammadu Sa’ad Abubakar and the Emir of Gwandu, Alhaji Mohammed Jega during the Sallah holiday and both leaders respectively expressed their admiration for his personality and capacity as a bridge builder and lover of peace.

The statement added that, “He had earlier held a major meeting with members of Ekiti State Traditional Council in Ado-Ekiti, with over 110 Obas in attendance. The Ekiti Obas who were excited at the possibility of one of their sons becoming the next President of the country, pledged their unalloyed support for Dr Fayemi’s presidential bid. The Ewi of Ado-Ekiti, HRM Oba Rufus Adeyemo Aladesanmi; Ajero of Ijero- Ekiti, Oba Joseph Adebayo Adewole and Owaoye of Okemesi Ekiti, Oba Michael Gbadebo Adedeji, who spoke on behalf of the Obas, said Fayemi is eminently qualified to lead the country in view of his exposure, education, experience and capacity.

“Fayemi’s engagements with political and traditional leaders went on side by side with consultations with his colleague governors, especially those elected on the platform of the ruling All Progressives Congress (APC). As at date he has conferred with and shared his vision with no fewer than 20 of the 22 APC governors, in the consultation process that is expected to run till the party’s primaries, later in the month.

“The NGF Chairman said the engagements with the traditional rulers and political leaders provided an avenue to share and listen to their perspectives on the ideal approaches to building a united country based on justice, freedom, equity and the rule of law. The aggregate opinion, counsel and goodwill received during the consultation period will form the crux of his declaration on Wednesday at the nation’s capital city.

Fayemi was born on February 9, 1965 and holds degrees in History and International Relations from the University of Lagos and Obafemi Awolowo University respectively, a Doctorate in War Studies from King’s College, University of London and is a Fellow of the Centre for Peace and Conflict Studies, University of Ibadan. His research and policy development interests include: Natural Resource Governance, Democratisation, Constitutionalism, Security Sector Governance, Civil-Military Relations and Regionalism in the Global Context.

He was the founding director of the Centre for Democracy & Development (CDD), a research and training institute dedicated to the study and promotion of democratisation, peace-building and human security in Africa.

“As a central figure in the coalition of civil society actors that resisted oppressive military rule in Nigeria in the early 1990s, he was central to the founding and running of opposition radio stations while in exile. His role in the struggle to restore democratic governance in Nigeria is documented in his book Out of the Shadows: Exile and the Struggle for Freedom and Democracy in Nigeria (CDD, 2005).

“His other publications include: Mercenaries: The African Security Dilemma, co-edited with Abdel-Fatau Musah (Pluto Press, 2000); Deepening the Culture of Constitutionalism: The Role of Regional Institutions in Constitutional Development in Africa (CDD, 2003); and Security Sector Governance in Africa: A Handbook (co-edited with Nicole Ball, CDD, 2004); Reclaiming the Trust (Amandla, 2012); Regaining the Legacy (Amandla, 2013); and Legacy of Honour and Service (Amandla, 2014). His most recent book, “Unfinished Greatness”, (which was unveiled in February), articulates his vision of a Nigeria Agenda that is inclusive, progressive, equitable and people centred.

Fayemi is a prominent member of the governing All Progressives Congress (APC) and chaired the party’s National Convention Planning Committee that produced President Muhammadu Buhari as Presidential Candidate for the 2015 general election. He also served as the Director, Policy Research and Strategy of the APC Presidential Campaign Council.

He was governor of Ekiti State between 2010 and 2014. He served as Minister of Mines and Steel Development in the Government of the Federal Republic of Nigeria between 2015 and 2018. As Minister, he led the administration’s efforts in repositioning the Nigerian Mining sector to contribute optimally to the priority agendas of diversifying the country’s revenue base and creating jobs and economic opportunities for Nigerians. He resigned as Minister to contest the governorship of Ekiti State for a second term in 2018. He won the election and was inaugurated for a second term as Governor of Ekiti State on October 16, 2018.

He is married to Erelu Bisi Fayemi, the renowned women’s and children’s rights advocate, international development specialist, writer and social entrepreneur and blessed with a son. He has received several awards and recognitions at home and abroad, and holds the national honour of Commander of the Order of the Niger (CON).