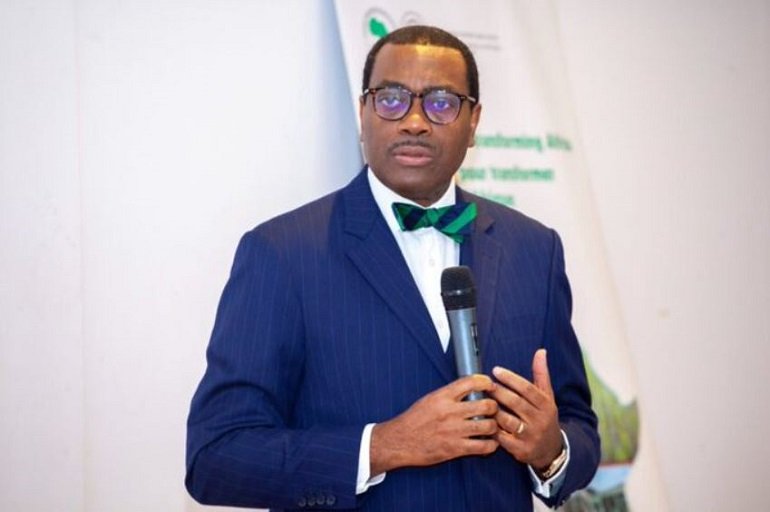 A diaspora group says the President of African Development Bank (AfDB) Dr Akinwumi Adesina is the right person to be the next President of Nigeria come 2023.

The group which is known as the Diaspora Support Group in North America and Europe insisted that “only Adesina has all it takes to address unemployment, insecurity, hunger among others.”

The group said that Adesina had been variously described by people close to him as the `Daniel who has come to judgment’.

They also said that Buhari, prominent Nigerians like Chief Olusegun Obasanjo, Ooni of Ife, Oba Enitan Ogunwusi among others had at various times, acknowledged Adesina’s capacity.

The group urged the electorate to scrutinise the strides Adesina made in the agricultural sector while he was Agric Minister under the President Goodluck Jonathan.

According to the group, the performance was so outstanding that Buhari, who came into power after Jonathan, endorsed him to take over the leadership of the AfDB.

“Now in his second term as president of the bank, words will fail one to tell how the bank has better the lots of several African countries in their development efforts,’’ they said.

The group recalled that the last time Adesina visited Ogunwusi, the Oba hailed his visitor for his vision that birthed the ‘High 5s’ initiative that would build a better tomorrow for Africa.

They said that the Ooni, in an Instagram post after the visit said that Adesina “busted my mind with what you recently did for Africa during the COVID-19 period.’’

The group said that the Ooni was impressed with Adesina’s efforts, which led to other Afrocentric projects and praised him for his time as Nigeria’s agric minister.

The group said that in the article, the presidential spokesman said “anytime Adesina traverses the land, air or sea like a troubadour, he must bring good tidings.”

According to the article, each time the AfDB’s boss comes to see Buhari, he never comes empty handed as he must bring goodies and goodies for his home country.

The group said in the article, the presidential spokesman recalled that Adesina recently came on a proactive rescue mission to alert

Buhari on the looming food crisis resulting from the Russia-Ukraine war.

The group said that the presidential spokesman’s article narrated how Adesina called for urgent action to prevent a food crisis in Africa as a result of the war between two major food exporters.

Quoting the presidential spokesman, the group said, Adesina told Buhari that Russia and Ukraine dominate the export of wheat and maize to Africa.

“With the disruption of supplies arising from the war, Africa now faces a shortage of at least 30 million metric tonnes of food imports from Russia and Ukraine, especially for wheat, maize, and soybeans.

“Price of wheat has soared in Africa by over 45 per cent since the war started. Prices of fertilizers have gone up by 300 per cent, and the continent faces a fertilizer shortage of two million tonnes.

“If unmet rapidly, food production in Africa will decline by 20 per cent, and the continent would lose over 11 billion dollars in value of food production.

“The AfDB under my leadership, is fully prepared to meet this new challenge head on as the bank has developed a 1.5 billion dollars Africa,” he said

He said that the Emergency Food Production Plan would support countries to produce food rapidly and mitigate the effects of the war on food prices.

“This plan, which is before the Board of Directors of the Bank for its approval, will be rolled out by the end of May and will cover all countries of the Bank,” he said.

According to him, Nigeria is top priority under the emergency food production plan.

According to him, for the dry season of 2022/2023, the plan will support one million farmers across 10 northern states.

“We expect that this will support 500,000 hectares of wheat. while the Plan for Nigeria will produce 9.5 million metric tons of food,” he said.

The group said that the presidential spokesman in the article narrated that Adesina told Buhari that the AfDB would also support Nigeria to develop Special Agro-Industrial Processing Zones.

“We have helped to mobilize 540 million dollars for the program.

“What is needed now is rapid action by Nigeria to implement the program to further boost food production, reduce food price inflation, and transform the agriculture sector, while assuring food security, and creating jobs.

“Your leadership will be critical for success. Failure is not an option. The farmers are waiting, Adesina told Buhari.”

Of bullion vans, Dubai and presidential candidates for sale by Dan Abubakar