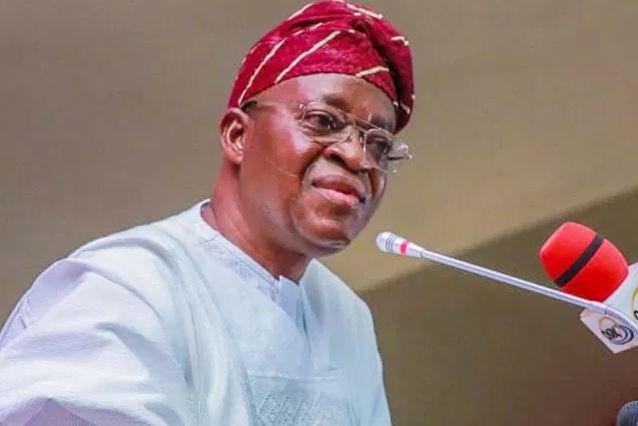 Governor Gboyega Oyetola of Osun has promised not to let the people of the state down, if re-elected in the July 16 Governorship Election in the state.

Oyetola said that the people of the state, who elected him in 2018, could attest to the various development projects he embarked on in the last three and a half years of his administration.

The governor said this during an engagement programme with members of Osun Chapter of Traders Association of Nigeria, “Egbe Olowo,” on Thursday in Osogbo.

Represented by his Special Adviser on Civic Engagement, Mr Olatunbosun Oyintiloye, the governor said that he would not in any way relax in the development of the state, as well as the welfare of the people during his second term in office

Oyetola said that his campaign for re-election was not out of desperation, but, ”it is rather aimed at the continuation of the good works he had started.”

Oyetola said that since inception, his administration had been striving towards reviving the commercial activities of the state for its economic growth.

The governor said that his administration was also revamping the economy through industrialisation and commercialisation.

This, he added, was by the establishment of the Ethanol Bio-Refinery factory, as well as the International Trade Centre/Industrial Hub and Inland Port, to create massive job opportunities.

The governor said that under the state government’s business uplifting fund, an initiative tagged:, “GBOWOGA,” 10,000 petty traders with disabilities were given the sum of N10,000 each.

Oyetola also said the initiative would boost businesses of the beneficiaries and further reduce poverty level.

He said, ”Through the programme, the sum of N100 million was distributed to 10,000 petty traders, artisans and market women groups.

”This is to boost their businesses and reduce poverty level to the barest minimum.”

The governor also said the state government, through the Central Bank of Nigeria and State’s Microcredit agency facilitated the disbursement of Medium Small and Micro Enterprises Development Fund (MSMEDF), to more than 2000 beneficiaries.

He said his administration had also facilitated household loans, through which more than 835 beneficiaries had received between N250,000 and N1 million as support funds.

Oyetola also said that the state government recently presented cheques in the sum of N53.2 million as compensation to victims of alleged police brutality in the state.

He said, ”The decision to pay compensation, which ordinarily is not the responsibility of the state, since the police are not directly under our control, is a further testament to the commitment of his administration to peace, and the rule of law.”

He said he was totally committed to the development of the state, as well as the welfare of the people, saying, ”I will not disappoint them.”

The governor, however, appealed to the registered electorate, who are yet to collect their Permanent Voter Cards to do so, to support his re-election.

In his remarks, Chairman of the association, Alhaji Ismaila Abdulganiyu, commended the governor for the introduction of Gbowoga initiative, which many traders had benefited from.

Abdulganiyu pledged the association’s support for the governor’s reelection bid for a continuation of his good works.