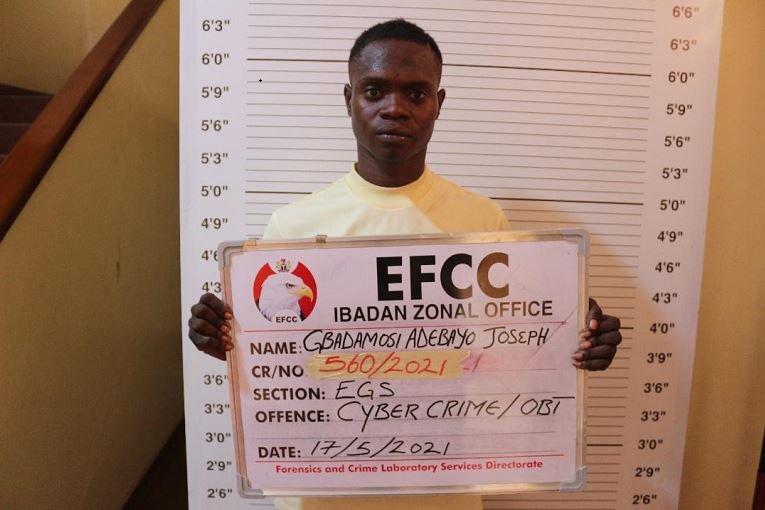 In the same vein, three other internet fraudsters: Tijani Wasiu Oluwakemi, Olunlade Quadri Olamilekan and Olaogun Segun Damilola were also convicted and sentenced to various jail terms by various courts for their involvement in internet fraud.

They were all arraigned on one-count separate charge bordering on criminal impersonation preferred against them by the Ibadan Zonal Command of the Economic and Financial Crimes Commission, EFCC.

They all pleaded “guilty” to the charge when it was read to them individually.

The one- count charge read: “That you Gbadamosi Joseph Adebayo (a.k.a Janet James) on or about 29th July, 2021, at Ibadan, Oyo State, within the jurisdiction of this Honourable Court, fraudulently impersonated by representing yourself to be Janet James from United States of America to one Dian Breshers, through your e-mail address ([email protected]), in order to gain advantage for yourself and thereby committed an offence contrary to Section 22 (2) (b) (i) and punishable under Section 22 (2) (b) of the Cyber Crimes (Prohibition, Prevention Etc) Act, 2015.”

In view of his plea, prosecution counsel, Bashir Shamsuddeen reviewed the facts of the case and prayed the court to convict and sentence Adebayo as charged.

Justice Uche Agomoh convicted and sentenced him to six months imprisonment and ordered him to pay a sum of $200USD (Two Hundred United States Dollars) in restitution to his victim.

Furthermore, the convicts were ordered to make restitution to their various victims and forfeit various devices, including one blue- coloured Toyota Camry Sport car to the Federal Government of Nigeria.

The convicts’ journey to the Correctional Centre started when they were arrested at different locations, by operatives of the Ibadan Zonal Command of the EFCC for their involvement in internet-related activities. They were prosecuted and convicted.

2023: APC moves presidential primaries to May 29