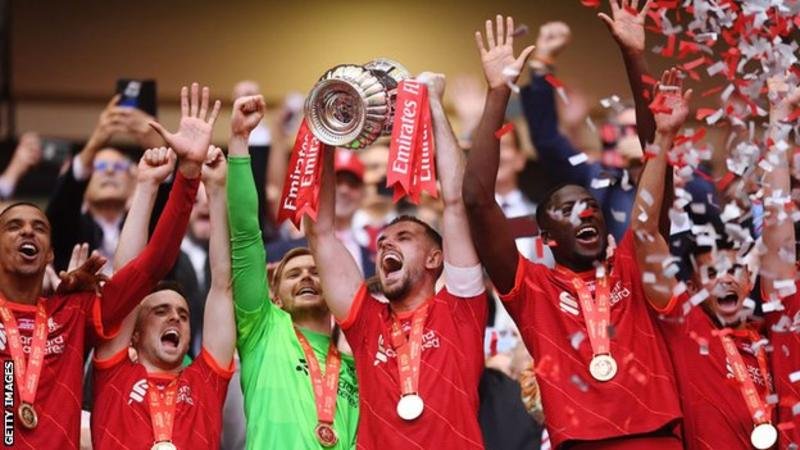 Liverpool remain in the hunt for a historic quadruple after winning the FA Cup following another Wembley penalty shootout against Chelsea.

The Reds are still in the Premier League title race and have the Champions League final to come against Real Madrid.

Liverpool had the better of an eventful final, with the outstanding Luis Diaz and Andrew Robertson hitting the woodwork, although it may come at a price with Mohamed Salah going off injured in the first half and Virgil van Dijk going off after 90 minutes.

It is a devastating blow for Chelsea and manager Thomas Tuchel to lose in this manner yet again as they had chances – with Marcos Alonso hitting the post and also being denied by Alisson – but become the first side to lose three successive FA Cup finals.

When Edouard Mendy saved Senegal team-mate Sadio Mane’s penalty in the shootout, when the Liverpool forward only needed to score to win the FA Cup, it just seemed for one moment that the Reds’ assault on four trophies might just be interrupted.

Alisson put Liverpool back on course when he saved from Mount, who was inconsolable as Tsimikas sent the Liverpool fans wild by converting the final penalty.

Once again Liverpool had prevailed against fiercely disciplined and determined opponents, even though they lost Salah to what looked like a muscle injury before half-time and Van Dijk did not emerge for extra time.

It remains to be seen how serious those problems are but at present it looks like Liverpool can overcome most obstacles put in front of them, even though it once again took penalties to claim their first FA Cup since 2006.

Diaz was the game’s outstanding player, running Chelsea ragged and peppering Mendy’s goal with efforts until he was substituted, exhausted, to a standing ovation.

Klopp refers to his players as “mentality monsters” and this illustrates why. Players from both sides gave so much that they were almost out on their feet at the final whistle.

Manchester City remain favourites in the Premier League, three points ahead and with a superior goal difference, and this was a strength-sapping occasion that will have taken much out of Liverpool before they face Southampton at St Mary’s on Tuesday.

What we do know, though, is that Liverpool possess remarkable powers of resilience and recovery as they continue their march on history.

Chelsea manager Tuchel thought redemption was at hand when Mendy saved from Mane, bringing the shootout scoreline back level after Cesar Azplicueta had hit the post earlier.

It was not to be though and the German understandably looked utterly disconsolate as he walked up to collect another Wembley losers’ medal.

This was a chance to set the record straight after losing the EFL Cup final on penalties in February, instead it was only more agony for Tuchel and his players after they gave everything in search of victory.

It will be of no consolation whatsoever that Chelsea have now matched Liverpool in two Wembley finals – and drawn both Premier League games – only to end empty-handed when it came to the four main trophies on offer this season.

Chelsea have won the Club World Cup and the Uefa Super Cup but they will not be factored into what has ultimately been a disappointing season.

They had their chances once again but could not cash in, with both Mount and Alonso denied crucially by Alisson.

Tuchel gave Romelu Lukaku a start but once again the £97.5m striker could not deliver. There was no lack of effort but no spark and he was eventually substituted.

There will now be a period of rebuilding, with Antonio Rudiger off to Real Madrid and captain Azpilicueta also expected to leave as the club embarks on a new era under new ownership once Roman Abramovich’s sale of the club has been completed.

Chelsea will have a place in next season’s Champions League as reward for their efforts this term but, make no mistake, this will have been a very bitter pill for Tuchel and his players to swallow.