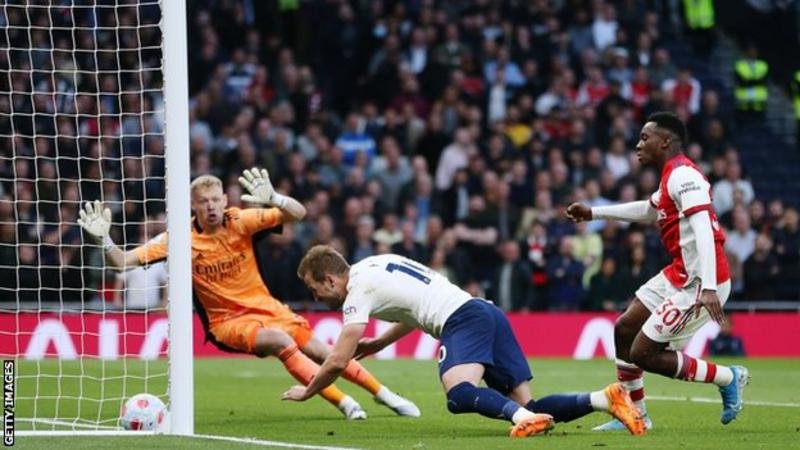 Tottenham turned up with pressure on arch-rivals Arsenal in the race for a place in next season’s Champions League with an emphatic north London derby victory.

Arsenal could have confirmed a place in the Premier League’s top four with a win at Tottenham Hotspur Stadium but endured a dismal night to now stand only one point clear of Spurs with two games left.

In a feverish atmosphere, Harry Kane gave Spurs the lead from the spot in the 22nd minute after Son Heung-min was fouled by Cedric Soares, then added a second before the break with a stooping far-post header after Rodrigo Bentancur flicked on a corner.

In between, Arsenal had been reduced to 10 men when Rob Holding was shown a second yellow card for a foul on Son, while the South Korean finished off any hopes the Gunners had when he fired in from 10 yards two minutes after half-time.

Tottenham on the march

Such was the manner of this Spurs win – added to the momentum they are gathering under manager Antonio Conte – they must have increasing belief they can yet snatch a top-four place away from Arsenal.

Conte’s team look so impressive, organised and solid in defence with the deadly pair of Kane and Son a permanent menace in attack.

Spurs have two eminently winnable fixtures remaining at home to struggling Burnley and at relegated Norwich City while Arsenal must travel to Newcastle United – no easy task these days – before a final home fixture against Everton, who may yet be fighting for survival.

Conte has brought the best out of this Spurs side by implementing his trademark fierce tactical discipline while still getting the most from those two outstanding forwards, who have been augmented by impressive January signing Dejan Kulusevski.

As Spurs flourished and Arsenal wilted, it made for a celebratory atmosphere among a record crowd of 62,027 inside the Tottenham Hotspur Stadium.

Tottenham are still the hunters but they have a real chance of making the top four to round off some fine work by Conte, who took over an out-of-sorts side in eighth place when he succeeded sacked Nuno Espirito Santo in November.

This was a night of unrelenting misery for Arsenal in an environment where their struggles are relished more than any other.

Mikel Arteta’s side were never given the chance to settle and once Kane put Spurs ahead it was all downhill, with Holding’s needless sending-off making an already difficult task impossible.

The late hamstring injury to key defender Gabriel only added to their suffering but the positive for Arteta and his players is that their destiny remains firmly in their own hands. If Arsenal win their next two games they will be in next season’s Champions League.

The more difficult aspect is that, given Spurs’ fixtures, the likelihood is that they may well have to win at Newcastle United on Monday to keep their ambitions on track.

Arsenal are so close and looked to be in pole position just a few weeks ago, so to miss out now would be a huge disappointment, especially as they have not had any European football to distract them from the job of finishing in the top four.

Arteta must ensure his players put this experience behind them but there is no doubt this defeat has put Arsenal under serious pressure befofe their visit to Tyneside, where manager Eddie Howe will want to round off Newcastle’s season at St James’ Park in style after moving them clear of relegation trouble with plenty to spare.