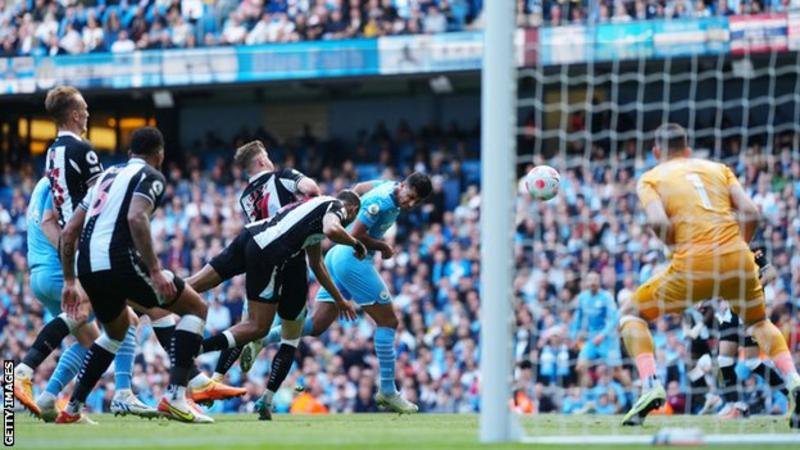 Manchester City shrugged off the crushing disappointment of their Champions League semi-final exit at the hands of Real Madrid to open a three-point advantage at the top of the Premier League with an emphatic victory over Newcastle United.

The reigning champions took advantage of Liverpool being held to a draw by Tottenham Hotspur with an impressive response that not only strengthened their position at the Premier League summit but also vastly improved their goal difference.

Chris Wood wasted a glorious early chance for Newcastle to add to City’s nerves and his side paid the price when Raheem Sterling headed Pep Guardiola’s team in front after 19 minutes.

Manchester City, with Newcastle deflated and outclassed, improved their goal difference even further when substitute Phil Foden struck in the closing moments, turning him Oleksandr Zinchenko’s touch, before Sterling completed the rout with a close-range finish in added time.

Manchester City faced plenty questions about their character and the potential response to losing a place in the Champions League final that they held in their hands until Real Madrid’s astonishing late comeback at the Bernabeu.

The manner of this win, and its wider significance, provided the perfect answer.

There were a few nerves around Etihad Stadium at the start and Newcastle striker Wood might have made them jangle even more had he not delivered a weak finish from Allan Saint-Maximin’s cross in the opening exchanges.

He not only directed a tame header straight at Ederson but arguably robbed Joelinton of an even better opportunity as the Brazilian lurked behind him.

Manchester City, in contrast, showed all their class in attack and once Sterling put them ahead there was only ever going to be one outcome.

It was a performance and result designed to lift their spirits and puts City in pole position to retain their title given they lead by three points with three games to play – and the margin of victory also giving them a better goal difference than Liverpool.

The closing stages were played out as a formality, with Manchester City in total control, the only cloud on their day the half-time substitution of key defender Ruben Dias.

However the addition of those two late goals gives City a nice cushion should they falter in any of their final games.

And Guardiola, an agonised figure in Madrid, was more buoyant as the action unfolded, even demanding a standing ovation for Gabriel Jesus from Manchester City’s fans when he was substituted, a request that was duly answered.

City have their destiny in their own hands, with away games at Wolves and West Ham United to come before a final-day home game against Aston Villa.

Newcastle are a club fuelled by high finance and huge ambition after their Saudi Arabian-based takeover but this was another chastening lesson in the scale of the gulf between where they are and where they want to be.

Liverpool delivered lesson one at St James’ Park last week and Manchester City rammed home the message by outclassing a Newcastle side in the early stages of a rebuild under manager Eddie Howe.

Newcastle showed one or two early signs of promise but their current standing was illustrated as they were over-run by a City side simply operating on a different level – although they hardly alone there.

The travelling Toon Army were in fine voice throughout and there is clearly understandable optimism around Tyneside but this must be tempered by the realism that there is no quick fix or easy route to what they hope will be their final destination.

City were utterly dominant and the final scoreline was a realistic reflection of just how far behind Newcastle are as they start their journey forward.

Manager Howe has done well to guide them to a position of safety in the Premier League with weeks to spare when relegation was once a realistic prospect – now even more serious work awaits in the summer.