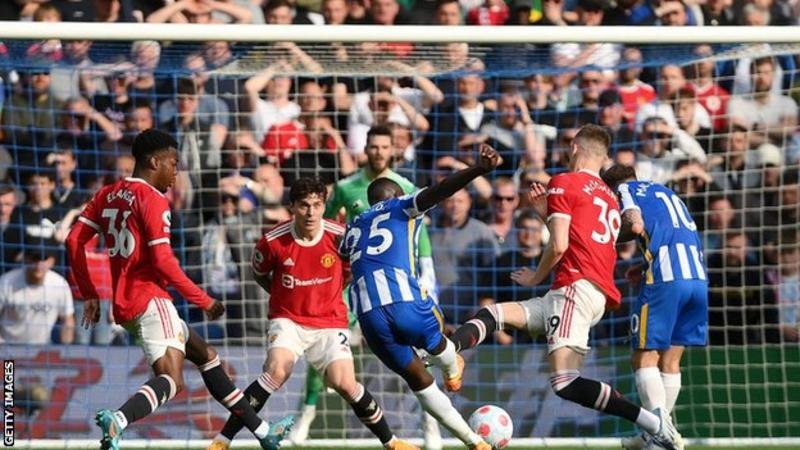 Manchester United suffered a humiliating defeat at the hands of a rampant Brighton at the Amex Stadium – a result that confirmed United would not qualify for next season’s Champions League.

Ecuador international Moises Caicedo put the hosts ahead with his first Premier League goal in only his sixth game, with a low 25-yard strike after United’s Alex Telles had failed to clear.

The visitors, in interim boss Ralf Rangnick’s penultimate game in charge before he is replaced by Erik ten Hag, fell apart in the second half, conceding three goals in quick succession.

Marc Cucurella fired into the roof of the net from Leandro Trossard’s pull-back for the second, with Trossard setting up Pascal Gross to calmly steer in a third.

Trossard scored Brighton’s fourth when he bundled the ball over the line from close range, with the goal eventually given after a video assistant review checked for a handball.

The defeat was United’s fifth successive away loss and ensured they cannot finish higher than their current spot of sixth in the Premier League, with only the top four playing in next season’s Champions League.

It will be only the fifth time in 30 years that they will not play in Europe’s major competition – and they could even miss out on the Europa League and drop into the third-tier Europa Conference League.

They are currently six points ahead of seventh-placed West Ham, who have two games in hand.

Brilliant Brighton set for their best season ever

For Brighton, watched by a record crowd at the Amex of 31,637, this was an evening their fans will remember for years to come.

They have had some great moments this season, drawing at Anfield against Liverpool, drawing home and away against Chelsea, taking four points off Arsenal and winning away at Tottenham. But none compares to this dominant victory over United.

Indeed, the Seagulls were not flattered by the margin of victory and could even have scored more, with Welbeck going close in the first half and unlucky not to add a fifth late on with an excellent effort from 25 yards that curled just past the post.

Edinson Cavani, set to leave the club on a free transfer at the end of the season, thought he had scored a consolation when he steered in Harry Maguire’s cross from close range – but that was rightly ruled out for offside.

More remarkably, this was ninth-placed Brighton’s first home win of 2022 after only picking up four points from their previous eight games at the Amex.

It kept them on course to claim their first ever top-10 finish in English football’s top flight in their 121-year history.

For United, the season cannot end quickly enough. They spent almost £120m on Raphael Varane, Jadon Sancho and five-time Ballon d’Or winner Cristiano Ronaldo, and hopes were high at the start of the season that they could push for the title after coming second last season.

But after Ole Gunnar Solskjaer was sacked in November, the club appointed Rangnick on an interim basis, although he was not given the chance to strengthen the squad in the January transfer window and the club have gone backwards.

Manchester United have been English champions a record 20 times, but the rebuilding task facing Ten Hag, who could win the Dutch Eredivisie on Sunday with current club Ajax, is growing by each match.

On this evidence, he faces the toughest task in football to bring United back to their glory years.