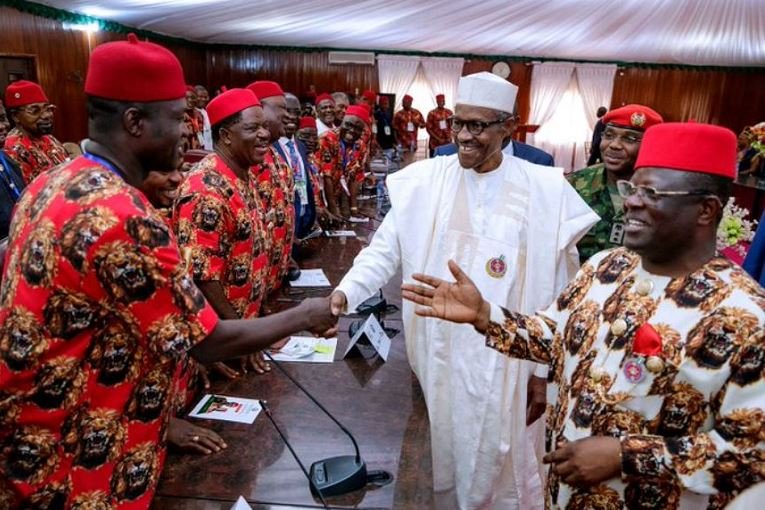 President Muhammadu Buhari has insisted that the leader of the proscribed Indigenous People of Biafra (IPOB) Nnamdi Kanu must defend himself in court.

The News Agency of Nigeria (NAN) reports that the president said this while responding to appeals for the release of detained IPOB leader.

NAN reports that South East traditional, religious and political leaders made the appeal during a town hall meeting with Buhari in Abakaliki, on Friday.

The meeting was the last official engagement of the president who was on a two-day working visit to Ebonyi.

“I have listened carefully to the various appeals from the elders to the traditional leaders regarding wide range of options.

Nnamdi Kanu is the leader of proscribed IPOB

“As I have said previously this matter remains in the full purview of the courts where it will be properly adjudicated.”

“My worry is for our hardworking and innocent civilians, for whom life is already though and would like to earn a decent and honest living,” Buhari said.

He frowned at the brutal activities of terrorists in the South-East and other parts of the country.

He reiterated the commitment of his administration to continue to protect and defend innocent citizens from those bent on causing breakdown of law and order across the country.

He also expressed concern over the worsening security situation in the region, reiterating his directive to security agencies to flush out those perpetrating violence in the land.

Governor David Umahi of Ebonyi, who appreciated the president for his visit to Ebonyi, reiterated his position for political solution to the Nnamdi Kanu dilemma.

On his presidential ambition, the governor expressed optimism that the president would support Southeast Presidency in 2023.

He, however, said it would be morally wrong for any candidate from the South-South and South-West to vie for All Progressives Congress (APC) presidential ticket if the party agreed to zone it to the South.

Others who spoke at the event including the Chairman, South East Traditional Rulers, Eze Charles Mkpumah and the Chairman, Christians Association of Nigeria (CAN), South-East, Rev. Abraham Nwali, appealed for the release of Kanu.