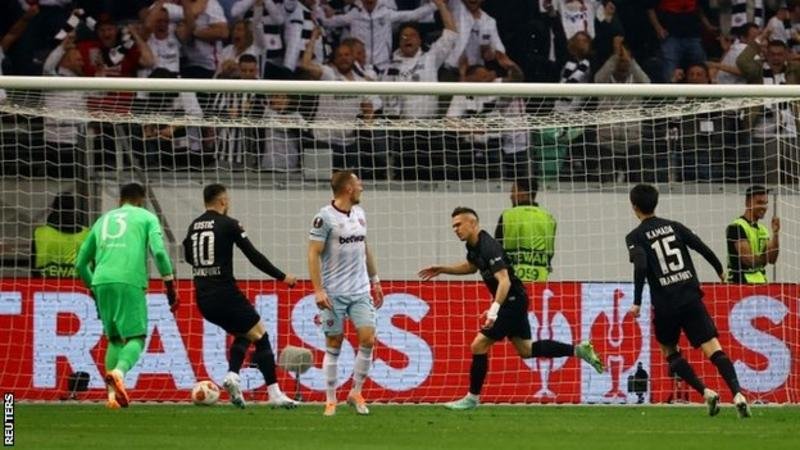 West Ham’s European dream is over as they were beaten in the Europa League semi-final by Eintracht Frankfurt, who will meet Rangers in the final.

Defender Aaron Cresswell and manager David Moyes were both sent off on a heated night in Germany as West Ham failed to set up an all-British final.

Moyes’ side lost their home leg 2-1 but started brightly until Cresswell pulled down Jens Petter Hauge, who would have been through on goal. He was initially shown a yellow card but it was upgraded to a red after a video assistant referee review.

The German side – who enjoyed a marvellously colourful partisan home support – went ahead when the unmarked Rafael Borre hammered home from Ansgar Knauff’s low ball.

The night got even worse for West Ham when a frustrated Moyes booted the ball at a ball boy and was shown a straight red card.

At full-time thousands of Frankfurt fans streamed on to the pitch to celebrate their first European final since 1980.

West Ham had a few chances in the closing stages with Michail Antonio forcing a save from Kevin Trapp and Tomas Soucek heading wide.

The Hammers’ wait for a major trophy will tick over into a 43rd year. It also means no place in next season’s Champions League.

Scottish side Rangers beat Leipzig in the other semi-final to ensure they will face Frankfurt in Seville on Wednesday, 18 May.

Not to be for West Ham and David Moyes

West Ham boss Moyes, who has never won a major trophy, said before the game he hoped this was his turn. Sadly, it is not.

And it ended on a low as he angrily asked for the ball back from a ball boy before blasting it back in their direction, earning himself a red card.

The Hammers have enjoyed some great moments on this run to the last four, but their last European final remains the 1975-76 Cup Winners’ Cup.

Now they have to make sure they take advantage of this momentum and book a place in Europe again next season. A poor finish to the season could yet lead to them dropping from seventh and missing out.

Frankfurt have some similarities to West Ham – they won trophies in the past, have provided players to their country’s World Cup win and have reached European finals – but have had more relegations than trophies in recent years.

Their season too has been based around Europe, with their run including a famous win over Barcelona in the quarter-finals. They sit 11th in the Bundesliga.

They were backed to the hilt at the Deutsche Bank Park as the players came out to a sea of black and white, loads of noise, banners, flares and confetti.

The scenes at the end were a concern, though, with West Ham’s players trying to applaud their travelling fans when thousands of Frankfurt supporters streamed on to the pitch.

About 30 fans had been arrested on Wednesday night after incidents involving both sets of fans.

The home side had a nightmare start when they lost key defender Martin Hinteregger to an early injury.

But they were able to replace him, a luxury West Ham did not have when Cresswell picked up his second Europa League red card for a professional foul in less than a month.

Ben Johnson replaced Manuel Lanzini and went to left-back but Frankfurt’s goal came from that flank when Knauff, who scored in the first leg, picked out Borre to fire home.

The Hammers had a few chances, including a Craig Dawson header at Trapp, but never really looked like completing a famous comeback.

Frankfurt did not threaten too much either, with mostly long-range shots, but that mattered little and Oliver Glasner’s first season in charge will end in a European final.