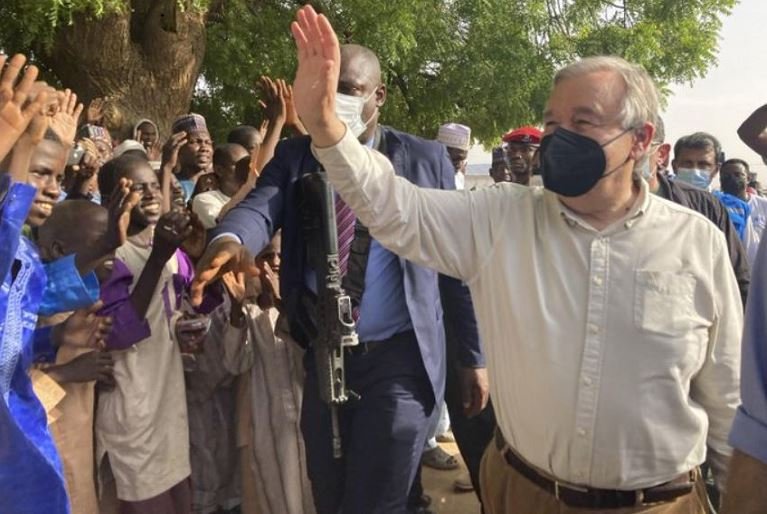 United Nations Secretary-General Antonio Guterres on Tuesday lauded Nigerian authorities’ ongoing reintegration of defectors from the jihadi Boko Haram group, which has waged a decade-long insurgency, as “the best thing we can do for peace.”

Speaking to reporters in Maiduguri, the capital of Borno state where the insurgency is centered, Guterres also called for more global funding to help rebuild lives in northeast Nigeria where the rebels are operating.

“The best thing we can do for peace is to reintegrate those who in the moment of despair became terrorists but now want to contribute to the well-being of their brothers and sisters,” the UN chief said after meeting with former militants at a rehabilitation camp in Maiduguri.

The Nigerian military said in March that 1,629 of the former fighters have so far graduated from the reintegration program.

In the final leg of his three-nation tour of West Africa, the UN chief is for the first time visiting Nigeria, Africa’s most populous country, where he called for donors worldwide to support humanitarian assistance in the northeast.

Their rebellion spread over the years to the neighboring West African countries of Cameroon, Niger and Chad. Boko Haram drew international condemnation in 2014 when they abducted 276 schoolgirls in Chibok village, more than 100 of whom are still missing.

Before his trip to Nigeria, Guterres was in Niger on Monday where he voiced strong concern over jihadi violence in the Sahel, the vast semi-arid area south of the Sahara Desert. “The international community must realize that this is no longer just a regional or African issue, but a global threat,” he said.

In Nigeria, Guterres visited a camp for people displaced by the violence.

“The people I met today want to go back home,” he said. But before they return, he said, authorities must put in place the necessary conditions — “security conditions, development conditions.”

The jihadi violence has directly resulted in approximately 35,000 deaths and the displacement of at least 2.1 million people, data from U.N. agencies in Nigeria show.

“I will be your advocate asking the international community to support and to invest in the Borno of hope,” Guterres told Governor Babagana Zulum of Borno State, who has been leading efforts to relocate the displaced persons back to their communities.

Amid the effort to return displaced people to the homes they fled years earlier, Nigerian President Muhammadu Buhari said on Sunday that the war against the militants is “approaching its conclusion.”

But according to the International Crisis Group, a Brussels-based think tank, the jihadist group — especially its most dominant faction the Islamic State West Africa Province (ISWAP) — is “consolidating its grip on new rural areas in Nigeria’s central and southern Borno state.”