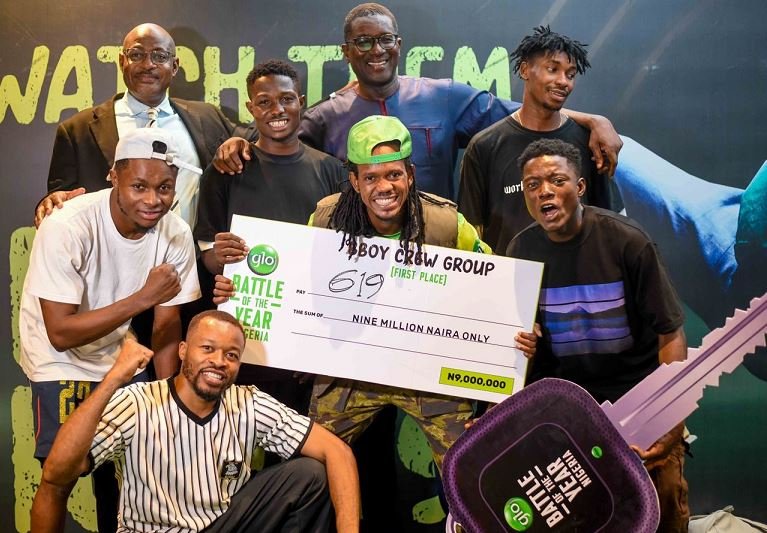 After more than three months of unlimited entertainment on the biggest dance reality competition in Nigeria, Glo Battle of the Year ended in grand style at the Eko Convention Centre on Saturday in Lagos.

It was an evening of dance, Music, and Comedy as the show climaxed with the final Bboy, Bgirls, and Breakdance crew dance battles with mega millions at stake for the winners.

The close-out performance of one of Africa’s finest musical acts, Davido, also heightened the excitement of the crowd and viewing audience. The pulsating pre-live show had the Breakdance Crew show off their dance prowess on the dance floor seeking to impress the judging panel. In the end, Lagos duo of 619 crew and Space Unlimited alongside Delta All-Stars and Port Harcourt power crew, Eleven All-Stars, emerged as semifinalists.

Teni and Simi opened the live show with exhilarating joint performance, to set Africa’s biggest dance entertainment show going. Nigeria’s Gordons and Basketmouth as well as top-rated Ugandan comedian, Salvador, ‘cracked the ribs’ of the audience with their performances.

Israel Monday and Charles Ekwem at the Glo Dance finale

The Bgirls finale could have been termed the ‘Lagos Vs Abuja’ finale, as one finalist from each region faced the other. In the end, it was Bgirl Cruxxy from Lagos that came out champion defeating Bgirl Vicky from Abuja to be crowned the number 1 Bgirl in Nigeria.

On the other, the Bboy category had Bboy Lil Dan, Bboy Off, Six God, Lil Vic, Lym, Midnight, Trixx, and Whirlz; 8 Bboys from 6 regions danced to the delight of both the judges and audience. Bboy Lil Dan from Lagos and Bboy Whirlz from Benin impressed the judges the most and made it to the finals. The Lagos-based dancer, Bboy Lil Dan however showed his skill and was crowned Champion in the Bboy Category.

In the Breakdance Crew battle, 619 Crew from Lagos progressed to the finals where they defeated Port Harcourt heavyweights, 11-All Stars, in an intense Breakdance Crews final battle.

The Grand Finale also served as the award ceremony where winners and runner-ups from the seven dance categories of the show were awarded their cash prizes courtesy of Globacom. The show was broadcasted live on both NTA and AIT networks nationwide.

Survey places Osinbajo ahead others in 2023 presidential race