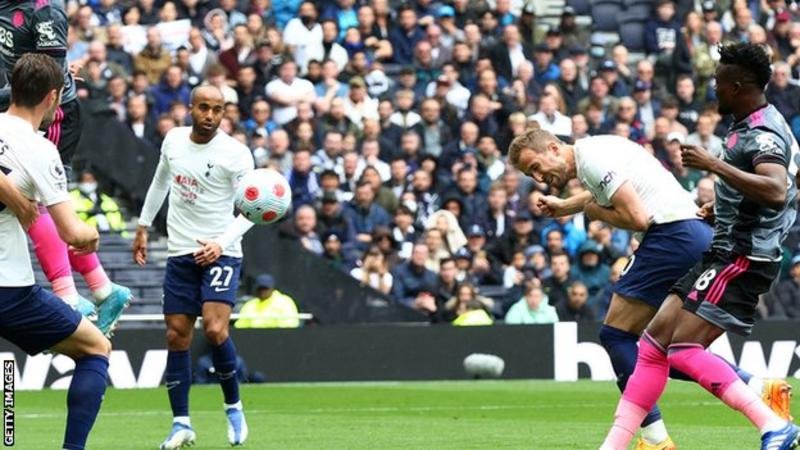 Son Heung-min scored twice and Harry Kane rediscovered his touch in front of goal as Tottenham beat Leicester to boost their hopes of a top-four Premier League finish.

Kane, goalless in his previous five Spurs games, headed in the opener from Son’s corner.

Son stroked in the second after being picked out by Dejan Kulusevski, then curled in a sensational third.

Leicester’s Kelechi Iheanacho scored a consolation with a crisp strike.

Tottenham moved into fourth place at the expense of Arsenal, who play at West Ham later on Sunday.

“It was a great, great afternoon, a great match and a great performance from the team. We totally deserved it,” said Son, who has scored 19 league goals this season.

Leicester manager Brendan Rodgers made eight changes to his starting XI, with the game coming in the middle of their two-legged Europa Conference League semi-final against Roma.

With upcoming matches against title-chasing Liverpool and top-four rivals Arsenal, Tottenham knew the importance of returning to winning ways against a Leicester side with more pressing priorities this week.

Spurs had not won either their two previous matches, punished for a sluggish display in a home defeat by Brighton and unable to break down a stubborn Brentford last weekend.

What was most startling about those performances, considering the amount of attacking talent at their disposal, was Spurs’ inability to record a shot on target in either game.

But Antonio Conte’s side led at half-time at Tottenham Hotspur Stadium with their only effort on target, then rediscovered their attacking verve after the break.

Their trusted combination up front delivered for the first when Son clipped a corner towards the near post, where Kane had escaped his marker Daniel Amartey to power in.

“We scored early in the first half and that changed the game – (we) knew we’d have more space in the second half,” said Son.

Son Heung-min has scored a career-high 19 goals in the Premier League this season, with only Liverpool’s Mohamed Salah (22) having netted more

The start of the second half was also tight before Son – helped by the running and guile of Kulusevski, introduced as a substitute after surprisingly being left on the bench – ensured there was no way back for Leicester.

Tottenham’s reinvigoration in front of goal particularly pleased Conte, who took over from Nuno Espirito Santo with Spurs eighth in the table.

“No-one could have imagined when I arrived in November we could be in this race still, but these players are deserving to fight for such an important place. It is not easy to qualify for the Champions League in England,” said the former Chelsea, Juventus and Italy manager.

“I think we were more clinical in this game. There was space for us and we exploited it very well. That was the key.”

While Leicester’s main focus is reaching a first European final, Foxes manager Rodgers insisted his much-changed side would not be distracted from their task at Tottenham.

But it was the old failing of defending corners which came back to damage Leicester.

“Defending corners has been a problem for us all season – we lack aggression and cuteness. It was so disappointing,” said Rodgers.

“It is something we will have to look at in the summer through personnel. The mentality to head the ball is missing, it’s something we would need to address.”

Rodgers was also left cursing Caglar Soyuncu’s inability to win a loose ball against Romero, which allowed Kulusevski to set up Son for Spurs’ pivotal second.

“We got the game back again and started the second half with confidence. We missed a challenge we cannot miss and they end up getting the goal from that. The challenge is in our favour, we have to win it,” said the Northern Irishman.

“The players kept fighting and the spirit was there. We kept fighting until the end. It is frustrating because of the nature of the game and there were lots of pleasing things.

“But you can’t give away cheap goals.”