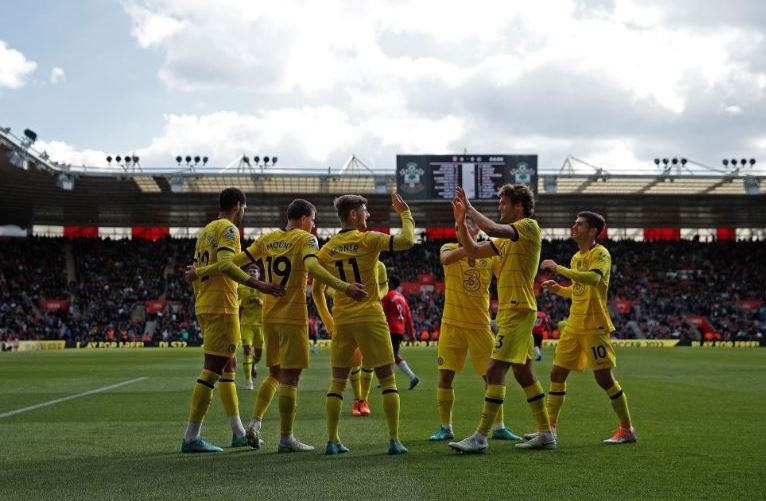 Chelsea put a terrible week behind them to return to winning ways in devastating style with a six-goal demolition of Southampton.

Having been beaten 4-1 at home to Brentford in the Premier League and then suffering a 3-1 defeat to Real Madrid, Chelsea bounced back in a manner that will give Thomas Tuchel encouragement his side can salvage their Champions League tie in Spain next week.

Tuchel said before kick-off that “things are upside down” after two damaging results but his players responded by hitting the woodwork three times and scoring four in an astonishing first half at St Mary’s Stadium.

Timo Werner hit the post and then headed against the bar inside the opening seven minutes before Marcos Alonso fired the visitors ahead after Mason Mount’s assist.

England midfielder Mount’s clean finish from outside the box doubled the lead and then Werner was thwarted by Fraser Forster’s fine save as Southampton unravelled in front of their own fans.

Werner was soon celebrating his first Premier League goal for six months after bursting through and finishing before Kai Havertz made it 4-0 with a tap-in after Germany team-mate Werner hit the woodwork for a third time.

Southampton were blown away and it required a remarkable one-handed stop by Forster to prevent an own goal by Mohammed Salisu before half-time.

However, the Saints did concede a fifth in the 49th minute, Werner tapping home his second after N’Golo Kante had been thwarted.

Mount made it six from close range on an embarrassing afternoon for Ralph Hasenhuttl and his Southampton players.

Timo Werner scored his second and third Premier League goals of the season, all of which have come against Southampton

This was Chelsea back to their clinical best as they took the Saints apart in destructive fashion.

Yet Tuchel will be just as pleased with the clean sheet after Chelsea conceded seven times in the previous two games to leave confidence on the floor.

Despite the absence of £97.5m forward Romelu Lukaku because of injury and captain Cesar Azpilicueta after a positive coronavirus test, they got back on track before another big week that will help shape their season.

They face a huge challenge to turn around their Champions League quarter-final with Real in the Bernabeu on Tuesday before heading to Wembley to face Crystal Palace in next Sunday’s FA Cup semi-final – their most realistic hope of a trophy as it stands.

Werner could yet play a big part in how Chelsea’s season finishes.

Without a Premier League goal since scoring against Southampton last October, he was back to his very best against Saints and should have finished with a hat-trick.

The first of his two goals was magnificent with the former RB Leipzig player having too much pace for the chasing Jan Bednarek before going round Forster and finishing.

Southampton have lost three consecutive Premier League games at St Mary’s, this after having only lost three of their previous 20 home league matches beforehand

Sorry Saints surrender without a fight

This was a sorry performance by Saints on an afternoon which revived painful memories of those two 9-0 defeats against Manchester United in February 2021 and Leicester in October 2019 under Hasenhuttl.

It was far too easy for Chelsea from the opening minute and but for Forster, who produced a string of fine stops as Chelsea peppered his goal with 14 attempts on target, they would have suffered an even more embarrassing defeat.

The Saints fans who stayed to the very end made their feelings known after this utter capitulation signalled a fourth straight home defeat in all competitions.

Fortunately Southampton appear safe in the table. They are 12 points clear of the relegation zone after enjoying several highs this season, including twice coming from behind to win at Tottenham and holding leaders Manchester City home and away.

But this was definitely a day to forget as they surrendered without a fight.