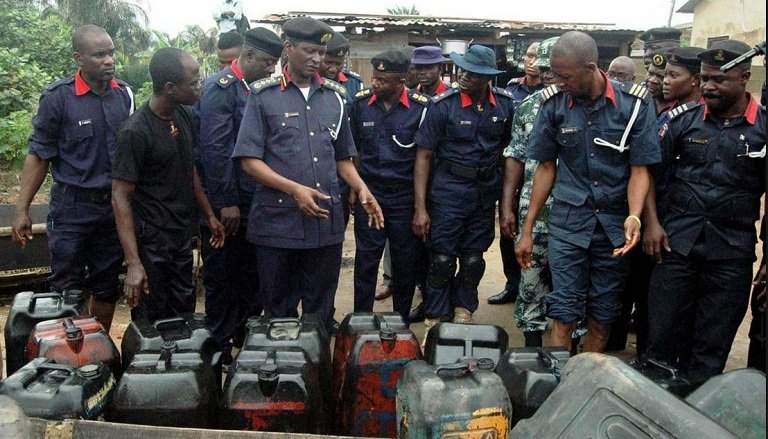 The NSCDC Commandant in Akwa Ibom, Mr Abidemi Majekodunmi, said this in an interactive session with newsmen in Uyo on Thursday.

Majekodunmi said the corps had the mandate to protect government critical infrastructure and ensure that economic saboteurs were brought to justice.

He said that the suspects had been charged to court for prosecution and those found guilty would face the full wrath of the law.

According to him, in the first quarter of the year, the agency placed significant emphasis on the protection of critical national assets and infrastructure.

“Here in Akwa Ibom, we do know that the network of pipelines are much and definitely, we have criminals and non-state actors tampering with the pipelines for economic profiteering and sabotage.

“When we get quality intelligence, we plan and execute operations to arrest. Currently, we have about seven boats. In that particular case, we have 69 suspects and illegal dealers in petroleum products.

“They have been charged to court and of course, we have done investigations and profiling of the cases for the court to do the appropriate adjudication,” he said.

The NSCDC state commandant said that the command was proactive in intelligence gathering across the 31 Local Government Areas of the state, to check criminality.

Majekodunmi said that NSCDC over the years had deployed technology to reach all criminal hideouts as part of its crime fighting efforts in the state.

He called on communities to protect government infrastructure in their domain against vandalism and to see the facilities as their own.

The commandant said that the corps would continue to promote crisis management and be proactive in dealing with conflicts in the state through peace and conflict resolution.

He warned oil thieves, pipeline vandals and other criminals to relocate from the state as the command would deal decisively with all economic saboteurs.

He called on the media to ensure objectivity in their reportage to guarantee peace and security across the country. (NAN)