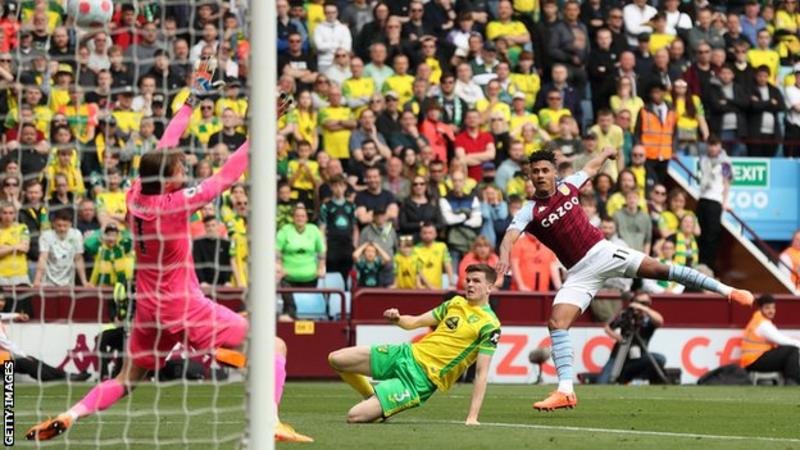 Norwich were relegated from the Premier League with defeat against Aston Villa at Villa Park.

The tame loss, coupled with Burnley’s dramatic comeback win at Watford, left the Canaries bottom of the table and 13 points from safety with four games to play.

Their fans continued to support as a relegation that has looked on the cards for some time was confirmed.

Ollie Watkins put Villa ahead in the first half, capitalising on a slip from Brandon Williams before lashing high into the net.

Williams’ error summed up Norwich’s season, as did their lack of potency in front of goal. They created limited openings, while Villa hit the woodwork in each half.

Manager Dean Smith said “plans are already in place” for their bid to return to the top flight.

“I think over the past four to five weeks, there’s probably been an inevitability about it,” he added.

“I’m disappointed that we got relegated today because I thought our performance was good, but unfortunately over the season, the performances have not been good enough and we’ve lacked the quality required in this league.

“[The players] are very down, very dejected.”

The low-key win for Villa ended a five-match winless run, lifted them to 13th in the table and took them to the 40-point mark.

Norwich head back to the Championship – again

This is the third successive time Norwich have been immediately relegated following promotion to the Premier League.

The afternoon was particularly painful for Smith, given that he left Villa earlier this season.

In truth, Norwich’s slide back to the second tier has looked likely throughout a season when they have rarely reached the standard required of a top-flight team.

Again, they were spirited and had good spells in possession, but their lack of threat in front of goal was once again laid bare, a diving stop to deny Milot Rashica from distance the only serious save Villa keeper Emiliano Martinez had to make.

Norwich have the fewest shots (336), fewest shots on target (100) and lowest shot conversion rate (7%) of all Premier League sides this season.

There were issues at the back too, with Villa’s opener coming from a long, hopeful ball that was not cleared, even before Williams’ slip. The full-back was also outmuscled by Watkins, whose finish was aided by a slight deflection.

Norwich have been relegated six times, more than any other in Premier League history

At full-time the Norwich fans applauded their side’s effort and there was no outpouring of emotion.

The club’s joint majority shareholder Delia Smith watched from the stands and some may again question the hierarchy’s resistance to spending big following promotion.

But their prudency, and manager Smith’s previous promotion with Villa, should leave Norwich well placed to bounce back once again.

“We will try everything to come up again,” the former Villa boss said. “It is a very difficult league to stay in. I spent £125m at Villa [after promotion in 2019] to keep us up.

“I can’t question attitude of the players.”

For Villa this was a much-needed boost. It all but ends any fears of an unlikely slip towards relegation themselves, their winless run having seen them drop from ninth to 15th.

Manager Steven Gerrard handed a full debut to 18-year-old England Under-19 midfielder Tim Iroegbunam, who was solid in a holding role.