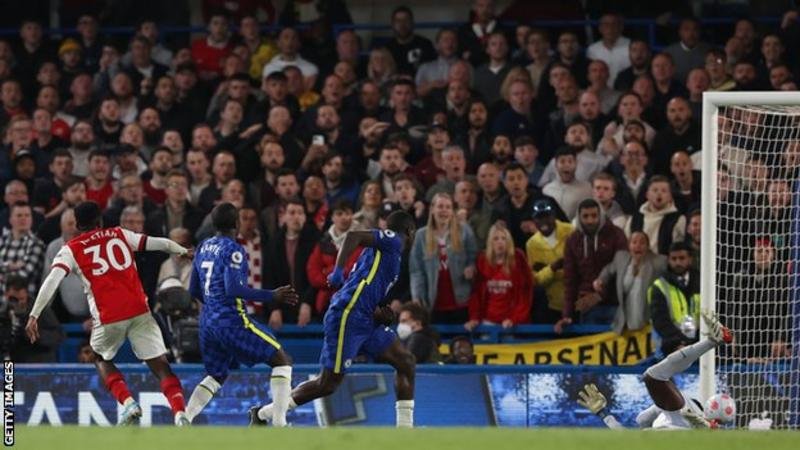 Arsenal got their pursuit of a place in the Premier League’s top four back on track as they ended a run of three defeats with a crucial victory at Chelsea.

The Gunners’ hopes of securing a place in next season’s Champions League had been significantly damaged by those losses but this win will provide renewed belief.

Eddie Nketiah was selected ahead of out-of-sorts Alexandre Lacazette in Arsenal’s attack and he rewarded manager Mikel Arteta’s faith when he took advantage of Andreas Christensen’s weak back pass with a composed finish.

It was the start of a chaotic first half as Timo Werner equalised with a deflected shot four minutes later before Emile Smith Rowe showed a touch of class to beat Chelsea keeper Edouard Mendy with a cool finish from the edge of the area.

Chelsea were back on terms again before the break through captain Cesar Azpilicueta but Nketiah pounced on a series of defensive errors in the Blues’ box to put Arsenal back in front just before the hour mark.

Bukayo Saka was outstanding for Arsenal and he got the reward his performance deserved when he sealed the win from the spot in added time after he was hauled down by Azpilicueta.

The Gunners are now level on points with north London rivals Tottenham with a derby at Emirates Stadium still to come.

Questions about Arsenal’s character and ability to maintain a fight for a top-four finish were starting to be asked after three defeats in a row but this was a display that showed plenty of grit.

Arsenal were on the front foot right from the start, pressing Chelsea into mistakes and refusing to buckle even when Thomas Tuchel’s side equalised twice.

Nketiah was the headline-grabber with two goals but Saka and Smith Rowe showed Arsenal have two real gems for the future.

Saka gave Marcos Alonso a tough time on Arsenal’s right flank, helping to create Smith Rowe’s goal, setting up other chances then scoring the fourth with a clinical penalty after he was fouled.

Smith Rowe demonstrated great composure to finish sweetly for his 11th goal of the season, a fine tally for this richly promising 21-year-old playmaker.

Arsenal now face struggling Manchester United at Emirates Stadium on Saturday lunchtime feeling much better about themselves after a deserved triumph.

Chelsea were playing in front of a reduced Stamford Bridge crowd of 32,249 with general tickets not on sale because of restrictions imposed on owner Roman Abramovich as a result of his alleged links with Russian president Vladimir Putin.

The season ticket holders who were there saw Chelsea suffer their third successive home defeat.

That spell has seen them concede 11 goals, four against Brentford and in this game against Arsenal in the league either side of a 3-1 Champions League quarter-final loss to Real Madrid.

Chelsea looked nervous and ragged at the back, with Denmark centre-back Christensen the biggest culprit.

His weak backpass set Nketiah clear to put Arsenal on their way and it was no surprise when he was replaced by Thiago Silva at the start of the second half.

It was also another disappointing night for striker Romelu Lukaku, who was finally given a start and a chance to kick-start his indifferent season by Tuchel.

Instead, he struggled and was replaced by Kai Havertz with the feeling that time is running out for the Belgium forward to justify his £97.5m fee.

Related Topics:ArsenalChelseaEddie Nketiah
Up Next