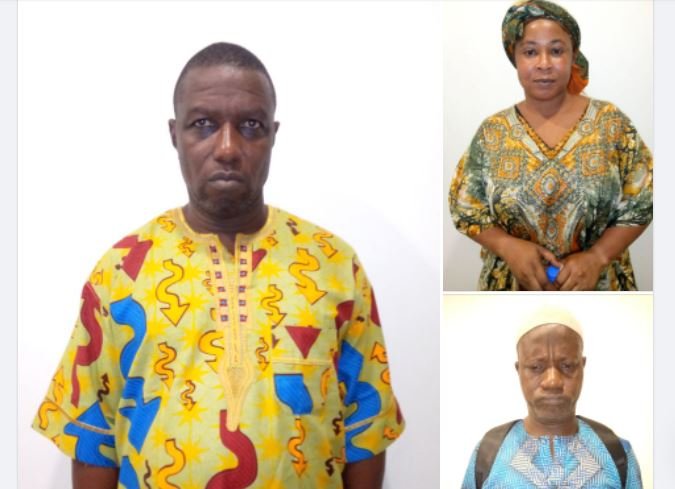 The Economic and Financial Crimes Commission, EFCC, has arraigned the trio of Alaka Abayomi Kamaldeen (alias Awise), Taiwo Fatai Olamilekan Ahmed (alias Ifa) and Akinola Bukola Augustina, a suspected syndicate of juju fraudsters, before Justice Adeyemi Ajayi of the FCT High Court in Abuja, on two -count charges bordering on conspiracy and obtaining money by false pretense to the tune of N250,000,000.

The trio were arraigned on March 31, 2022 for obtaining the sum of N250 million under a false pretence of offering local sacrifices to heal a petitioner of a protracted ailment.

One of the counts read: “That you, Alaka Abayomi kamaldeen( alias Awise), Taiwo Fatai Olamilekan Ahmed(alias Ifa) and Akinola Bukola Augustina sometimes between the year 2019 and the year 2020 in Abuja in the Abuja Judicial Division of the High Court of the Federal Capital Territory did conspire to do an illegal act to wit; obtained the gross sum of N250,000,000.00 (Two Hundred and Fifty Million Naira) only from one Bright Juliet under the false pretense that you possess supernatural powers and capable of healing her from an ailment at a shrine located at Asipa Town, Abeokuta, Ogun State, which you knew to be false, thereby committed an offence contrary to Section 8(a) of the Advance Fee Fraud and Other Fraud Related Offences Act, 2006 and Punishable under Section 1(3) of the same Act”.

They entered into “not guilty” pleas when the charges were read to them.

Prosecution counsel, Benjamin Manji prayed the Court for an accelerated trial and remand the defendants pending the determination of their bail conditions.

Counsel for the 1st, 2nd and 3rd defendants, Olalekan Ojo, SAN, Oladimeji Ekengba and D.A Awuopila asked the court to consider the application for the bail of the defendants.

Justice Ajayi remanded the defendants in Keffi Correctional Centre, Nasarawa State and adjourned the matter till May 26, June 14 and 15, 2022 for trial.