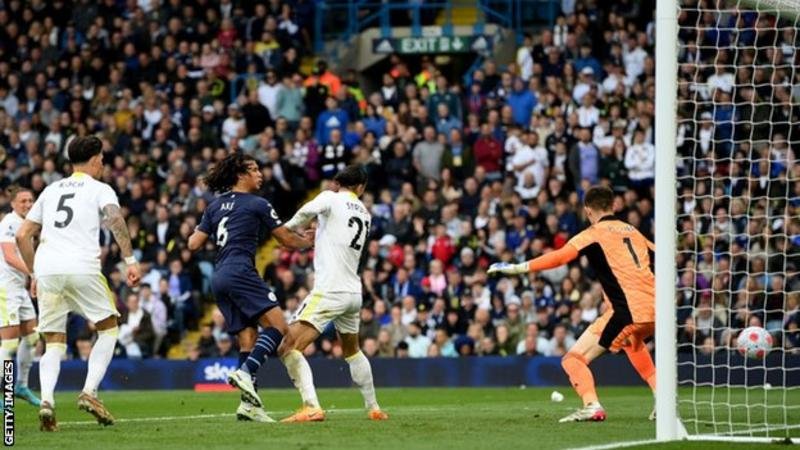 City needed the win after Liverpool had overtaken them earlier in the day with victory at Newcastle and produced a highly impressive display in Elland Road’s hothouse that also prolonged the relegation worries for Jesse Marsch’s side.

The reigning Premier League champions went ahead in the 13th minute when Rodri glanced home Phil Foden’s free-kick and while Leeds were spirited, they barely tested visiting keeper Ederson until the game was lost.

City doubled their advantage nine minutes after the break from another set piece, Nathan Ake pouncing from close range when Foden’s corner was headed down by Ruben Dias.

Foden was City’s brilliant orchestrator and he was involved again when he set up the third for Gabriel Jesus with 12 minutes left, before Fernadinho added the fourth with virtually the last kick of the game.

It is now a case of who blinks first in the title race. Liverpool put the pressure on Manchester City by going to in-form Newcastle United and winning in the lunchtime game.

For the late game, manager Pep Guardiola had to consider not only the challenges posed by the traditional fearsome atmosphere inside Elland Road and a Leeds United side desperate for the points, but also this coming Wednesday’s Champions League semi-final second leg against Real Madrid.

Guardiola left Kevin de Bruyne, Bernardo Silva and Riyad Mahrez on the bench to keep them fresh for the test of protecting a 4-3 lead in Spain.

The strategy worked as Manchester City came through in relative comfort in what was always going to be a tough physical examination.

City were helped by Leeds’ struggles to defend those set-pieces, with Rodri glancing home the first goal with ease early on and Ake being allowed too much time to turn in the second.

The pressure will be on every game for City now, with Liverpool also showing no signs of slipping up, but this was imperious from Guardiola’s men, who were simply too good for a Leeds side who showed lots of commitment but lacked quality and threat.

Foden was behind all of Manchester City’s best work, a spectacular talent, a creator who adds a tireless work-rate and strength to his many other qualities.

With their Premier League lead restored, City’s pursuit of glory now moves on to the Bernabeu.

Leeds have experienced something of a bounce since the sacking of the beloved Marcelo Bielsa in February, and his replacement with Marsch, but they are still in real danger of the drop.

Burnley’s remarkable renaissance since sacking Sean Dyche and replacing him with Mike Jackson has set nerves jangling at Elland Road – and even louder at Everton.

Leeds showed their spirit was intact and the magnificent, noisy support of their followers can never be doubted as they continued to give deafening backing to their side even with the game gone.

Marsch, however, needs to somehow find goals in the latest absence of main striker Patrick Bamford and the loss of the influential Stuart Dallas to what looked like a serious injury when he flew into a challenge on Jack Grealish.

Dallas, under-rated outside Leeds, is the glue which helps to hold the side together and he will be a major loss.

Leeds cannot allow this comprehensive defeat by a side of Manchester City’s class to inflict too much damage on morale. There is no time for that and there is no shame in being beaten by such quality.

They must refocus for two tough upcoming games, away to Arsenal and at home to Chelsea. Everton may have two games in hand, but have a tough run-in of their own – and Leeds have what might be five crucial extra points on the board.