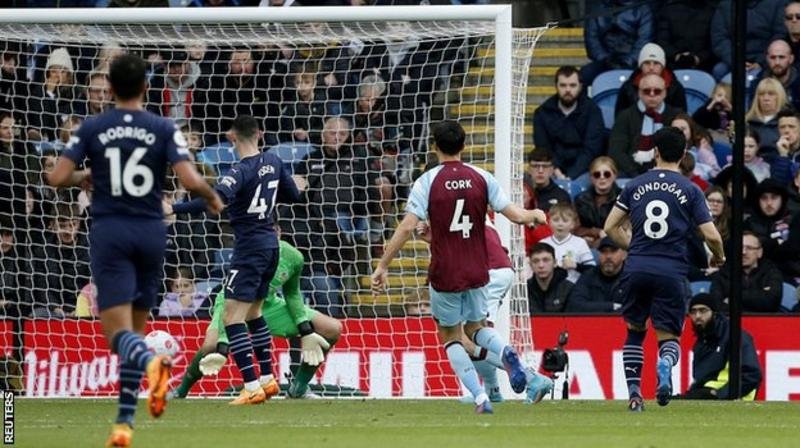 Manchester City made an instant return to the top of the Premier League with a comfortable win over struggling Burnley.

Liverpool’s victory over Watford earlier on Saturday had knocked the defending champions off the summit for the first time since 4 December, but Pep Guardiola’s side responded in impressive style at Turf Moor.

It took only five minutes for City to take the lead when Raheem Sterling knocked Rodri’s cross into the path of Kevin de Bruyne, who time to pick his spot and fire into the roof of the net.

Sterling and De Bruyne combined again for the second goal, but this time it was Ilkay Gundogan who provided the finish – a cool volley past Nick Pope after Sterling found him in space inside the area.

By now, City were in complete control and could afford to see Sterling, Jack Grealish and substitute Gabriel Jesus waste excellent chances because Burnley never looked remotely capable of mounting a comeback.

The home side finally managed a shot on target after 75 minutes, when substitute Jay Rodriguez brought a diving save from Ederson, but they can take few positives from a fourth successive defeat other than the fact they avoided significant damage to their goal difference.

Burnley remain rooted in the bottom three, while City can head into next Sunday’s top-of-the-table clash with Liverpool knowing they will stay in first place if they avoid defeat.

Manchester City should have scored more

City have got a huge week ahead, with the first leg of their Champions League quarter-final with Atletico Madrid on Tuesday, before the visit of Jurgen Klopp’s in-form Liverpool next Sunday – the start of a sequence where they play both teams twice.

Those are the games which will define City’s season, but they needed to focus on this test first – and they passed it almost flawlessly.

De Bruyne’s early goal settled the nerves of the travelling fans after Josh Brownhill sent an early header flashing wide for the hosts, and the points never looked in doubt from that point.

For long periods Burnley did not even get near the ball let alone City’s penalty area, while City seemed content to keep possession rather than put much effort into chasing further goals.

They still created a host of second-half chances, with their failure to finish them the only way their performance could be faulted.

They cannot afford to be so wasteful against Atletico or Liverpool in the days to come.