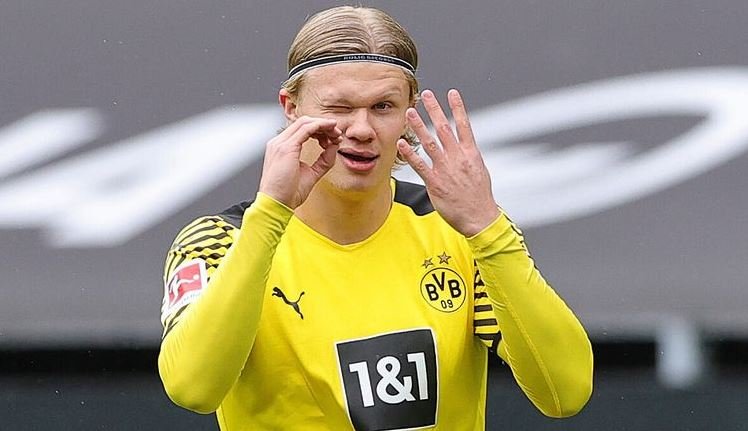 Real Madrid are reluctant to meet Haaland’s wage demands because they do not want to unsettle their dressing room of stars by making the striker the highest-paid player in the squad. (Goal)

If a deal for Haaland does not materialise, Real may target Manchester United and Uruguay striker Edinson Cavani, 35, instead. (Fichajes – in Spanish)

His former side Lyon are among the clubs Arsenal striker Alexandre Lacazette, 30, is in talks with about a free-agent move in the summer. (Canal Plus – in French)

Juventus want to take Paul Pogba, 29, back to Turin on a free transfer when his Manchester United contract expires in the summer – but the Bianconeri will face fierce competition from Paris St-Germain and Real Madrid for the France midfielder. (Football Italia, via Sport Mediaset)

Liverpool target Serge Gnabry, 26, is in talks with Bayern Munich over a contract extension. The Bundesliga club are keen to hold on to the Germany forward, whose contract expires next year. (Goal)

Matt Targett wants Newcastle United to make his loan move from Aston Villa permanent. The 26-year-old English left-back is keen to be part of Eddie Howe’s project despite having three years left on his Villa contract. (Chronicle)

Tunisia want France-born Southampton defender Yan Valery, 23, to switch international allegiance and play for them at the World Cup in Qatar. Valery is eligible as his mother is Tunisian. (Mail)

Arsenal lead the pack of Premier League suitors tracking 26-year-old Spain winger Marco Asensio of Real Madrid. AC Milan appeared to be in the driving seat for his signature, but the Serie A club rejected his wage demands. (Calcio Mercato – in Italian)

Manchester United and Erik ten Hag are close to completing their negotiations but will wait to announce the deal officially until a 2m euros (£1.6m) compensation clause for the Dutch manager has been agred with his current club Ajax. (Fabrizio Romano)

Real Madrid are looking into the possibility of signing Chelsea defender Antonio Rudiger, 29, on a free transfer when the Germany centre-back’s contract expires at the end of June. (ESPN)

Rudiger turned down Manchester United after they held talks with his representatives. His priority is a club guaranteed to qualify for next season’s Champions League. (Manchester Evening News)

Aaron Ramsey’s loan move from Juventus to Rangers will not be made permanent after the 31-year-old Wales midfielder suffered another injury in the Scottish Cup semi-final against Celtic. (Corriere dello Sport – in Italian)

Fulham want Arsenal’s England Under-21 striker Folarin Balogun on loan next year, with the Cottagers on the brink of promotion to the Premier League. The 20-year-old United States-born forward is on a season-long loan at Middlesbrough. (Mail Plus, subscription required)

West Ham are set to trigger the one-year extension built into the contract of Italy centre-back Angelo Ogbonna, 33, when it expires at the end of the season. (The Athletic – requires subscription)

AS Monaco sporting director Paul Mitchell is being closely monitored by parties interested in buying Chelsea, who see him as a potential technical director at Stamford Bridge. (The Athletic – subscription required)

Derby County relegated to League One after QPR loss