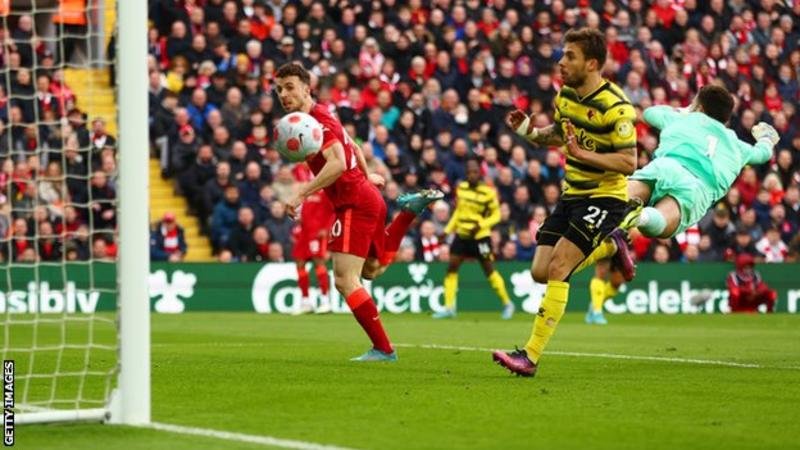 Liverpool beat struggling Watford 2-0 to complete a remarkable return to the top of the Premier League – for a few hours at least.

The Reds trailed Manchester City by 14 points on 15 January, but a 10th straight league win at a raucous Anfield took them above Pep Guardiola’s side, whom they meet on 10 April.

Diogo Jota’s 20th club goal of the season and his third in as many appearances in a red shirt – 34 seconds after Alisson made a huge save to deny Juraj Kucka – helped seal a tense win.

Portugal forward Jota jumped between two Watford defenders to meet a cross and head past Ben Foster as Joe Gomez marked only his second league start of the season with an assist.

Despite sealing a potentially significant win, Liverpool were not at their fluent best.

Joao Pedro wasted a glorious chance to equalise in the second half as Watford remain third from bottom, three points from safety.

Liverpool are two points ahead of City, who face second-bottom Burnley at Turf Moor at 15:00 BST.

Liverpool are back on top for the first time since October, and at the start of the final push towards a historic quadruple.

They face Benfica in the quarter-final first leg of the Champions League in Portugal on Tuesday before going to City in what many are billing as the game that could decide the title.

Liverpool, already Carabao Cup winners, started the penultimate month of the campaign – in which they also face City at Wembley in the FA Cup semi-final – with a hard-earned win in a game where the result was more important than the performance.

Alisson had already denied Cucho Hernandez when he spread himself to block Kucka, before Jota pounced moments later.

Unlike team-mate Mohamed Salah, Jota will be going to the World Cup later this year after helping Portugal beat North Macedonia in a play-off in midweek.

While a tired looking Salah, who was pelted with missiles and targeted by green laser pointers as Egypt missed out on the World Cup to Senegal on Tuesday, was replaced after 69 minutes, Jota could have had a hat-trick.

Having been denied a second goal by Foster before half-time, he headed another chance over the bar in front of the Kop.

Tension was replaced by relief when Fabinho’s 89th-minute penalty – awarded after referee Stuart Attwell watched a replay on the pitchside monitor – ensured Liverpool got the job done.