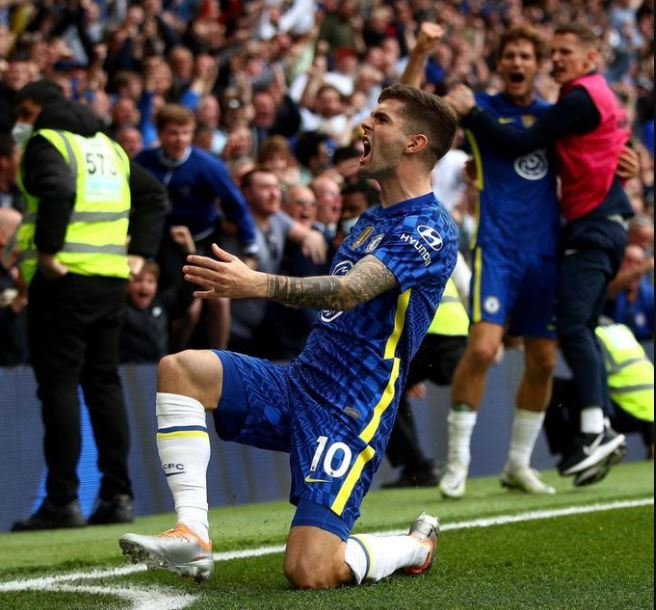 David Moyes rested six players before their Europa League semi-final on Thursday and it looked like they might hold for a precious point when Jorginho’s woeful effort from the spot was saved by Lukasz Fabianski after 87 minutes.

But after Craig Dawson was sent off after a video assistant review for fouling Romelu Lukaku in the build-up to the penalty, Pulisic turned the saviour as he tucked in Marcos Alonso’s low cross.

It sent Stamford Bridge into raptures after a frustrating afternoon that looked set to continue manager Thomas Tuchel’s poor form at home, with his side having lost their last three games.

What a time to score! 😎 pic.twitter.com/cm495fNm5K

But the victory sparked relief for him and his players as they recovered from their midweek defeat by Arsenal to move five points clear of the fourth-placed Gunners.

West Ham will be distraught they did not get anything from the game after a sterling display, with Declan Rice, Jarrod Bowen and Michail Antonio all starting on the bench.

Chelsea’s recent woes on the pitch have mirrored their uncertainty off it as the club waits for new owners to take charge and give it new direction.

Recent defensive problems have not been helped by news that Antonio Rudiger is set to leave at the end of the season after failing to agree a new deal despite being offered a contract of more than £200,000 a week.

But this late victory gave Stamford Bridge a huge lift even if it looked as if Jorginho had thrown away Chelsea’s best chance when his under-hit penalty was easily gathered by the West Ham goalkeeper.

A clean sheet for the hosts was also welcome, particularly as they were without the injured Rudiger and Reece James, and forced into a late reshuffle when Andreas Christensen was replaced by Trevoh Chalobah, despite the Dane initially being named in the starting line-up.

James was missed in a lacklustre first half. Ruben Loftus-Cheek filled in at right wing-back but Chelsea could not penetrate West Ham’s defensive wall under the expert marshalling of the evergreen Mark Noble.

In front of another restricted crowd of 32,231 because of sanctions against owner Roman Abramovich, and with striker Lukaku starting the game back on the bench, there was little to rouse the crowd before the break with only an off-target effort by N’golo Kante coming anywhere close.

West Ham were happy to soak up the pressure and went closer to scoring through Andriy Yarmolenko and Said Benrahma, although the latter’s saved effort was deemed offside.

The first shot on target did not come until close to the hour mark, when the home fans finally got off their seats. Dawson brilliantly blocked Timo Werner’s effort before Kante and Chalobah had shots saved by Fabianski.

Tuchel also woke from a slumber to berate the officials after Rice was deemed to have been fouled shortly after coming on to replace Noble.

After Werner went close twice more, Tuchel made a triple substitution with Lukaku, Pulisic and Hakim Ziyech all coming on.

And it was not long before it made an impact. Lukaku was slipped through and pulled back by Dawson. Referee Michael Oliver awarded a penalty and a yellow card, but after a VAR review upgraded it to a red.

That looked like it would lead to a home win when Jorginho, who had converted his last 13 spot-kicks, stepped up.

But his embarrassment was spared by Pulisic, who scored his seventh goal of the season from Alonso’s cut-back, leading to Tuchel and the fans punching the air in delight.