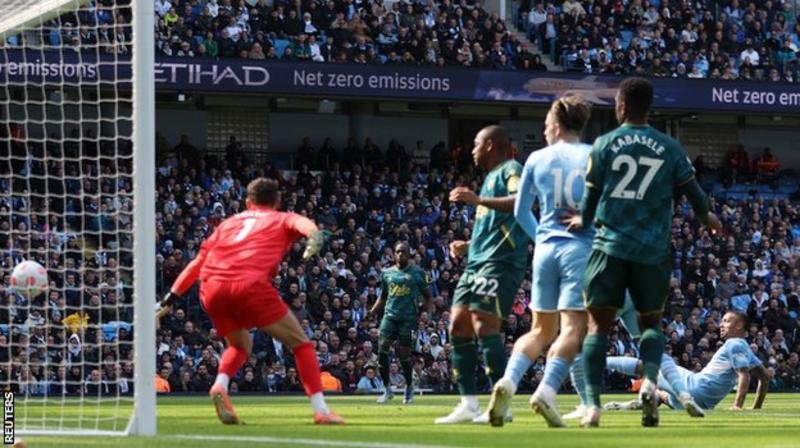 Gabriel Jesus scored four goals and made a fifth as Manchester City thrashed Watford to move four points clear at the top of the Premier League.

With a month of the season to go, City know they will be champions if they win all their remaining league games and they will hope for more afternoons like this one, where their victory was never in doubt.

Watford tried their best, but they were outclassed by a rampant City team and remain anchored in the bottom three, seven points adrift of safety.

The Hornets have suffered heavy defeats at Etihad Stadium before, losing 8-0 here on their last visit in 2019. They suffered more misery this time, with Jesus the man most responsible.

The Brazilian put City ahead inside four minutes when he turned in Oleksandr Zinchenko’s driven cross, then doubled their lead when he headed home a precise Kevin de Bruyne delivery from close range.

Hassane Kamara pulled a goal back when his powerful angled drive eluded Ederson, but Rodri restored City’s two-goal advantage before the break with a thunderous shot into the top corner after Jesus found him on the edge of the area.

Any hope of a Hornets comeback was ended right at the start of the second half, when Kamara’s mistake allowed Jesus to run in at goal and he was felled by visiting keeper Ben Foster.

Referee Kevin Friend pointed at the spot and, after a lengthy VAR check not helped by a problem with Friend’s microphone, the decision stood – allowing Jesus to slam home the penalty and complete his first Premier League hat-trick since arriving in Manchester in 2016.

Jesus was not done yet, rounding off a superb team move soon afterwards when he ran on to a De Bruyne pass, and although no more goals followed in the final half hour, City had long since wrapped up the points.

Every goal counts for City now

City’s advantage over second-placed Liverpool is the biggest it has been since 16 March, but that might only last until Sunday’s Merseyside derby, when the Reds have a chance to respond.

In a title race as tight as this one, goal difference could well play a part and the size of this win means City’s is now on +59, just two behind Liverpool on +61.

While City were expected to improve those numbers against the struggling Hornets, to see Jesus lead their charge was something of a surprise.

Before Saturday, the 25-year-old Brazilian had scored only seven goals all season, with just three of those in the league, and he was being used more often as a right winger than a striker.

His future was uncertain too, with his contract up in 2023 and talk of a possible switch to Arsenal this summer emerging this week, so this was a reminder of his value of Pep Guardiola’s side.

You would not quite describe Jesus as an unlikely hero – he has played a big part in too many of City’s previous successes for that, but this was a timely return to scoring form, especially with Real Madrid the next visitors to the Etihad in the Champions League semi-finals on Tuesday.