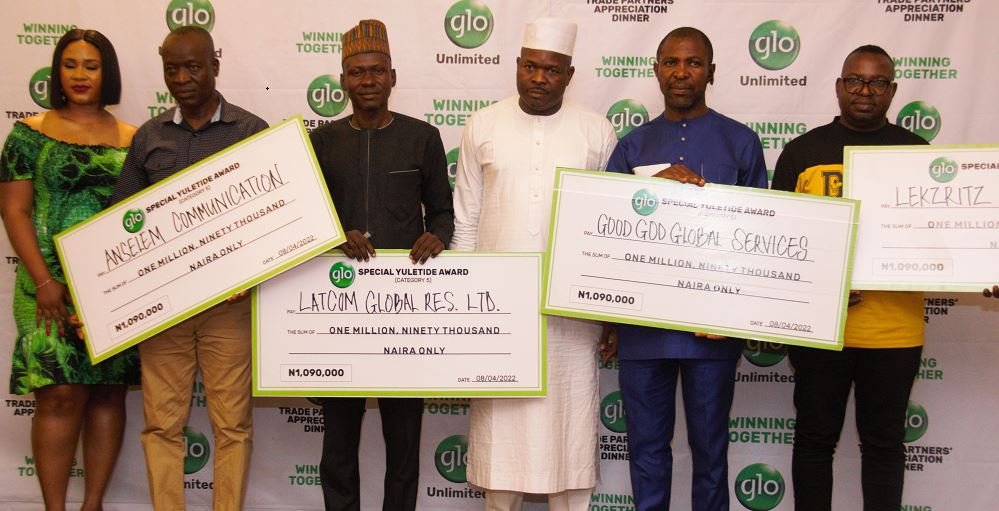 On Friday, April 8, 2022, Globacom, took time out to celebrate its top business partners at the exquisite 2022 Dealers Appreciation Gala Dinner hosted at the Eko Hotels and Suites.

At the event, the company announced over N750m worth of unprecedented rewards for the dealers in appreciation of their past support.

In his address, the chairman of Globacom Dr. Mike Adenuga Jr who was represented by Retail & Consumer Sales Chief, Globacom, Mr. Ken Ogujiofor, explained that the event is a continuation of Glo’s tradition of rewarding and upholding excellence among its treasured partners, adding that, in the last quarter of 2021, Globacom announced a special incentive by Mr. Chairman to bolster the distribution business and encourage its partners to strive even higher to meet the business goals of the company.

“We are delighted to note that the reward programme was a huge success, with many of our partners achieving and surpassing the target bands set for the two categories; volume push and activations. Very shortly, we shall be presenting prizes to the winners from different parts of the country”. He further stated.

He concluded by saying that the event was organized to celebrate Glo’s business partners who have worked assiduously with the company in its quest to make Globacom the number one Telecommunications and Digital services provider in Nigeria.

In response, the visibly excited dealers were effusive in their praise of Globacom which rewarded different categories of its dealers with cash prizes in form of credit notes running into millions of naira, in addition to other incentives.

“Globacom has delighted its trade partners tonight and on behalf of my fellow dealers, we say thank you to Globacom” said Managing Director of Zeph Associates, Mr. Tochukwu Nwosu whose company carted home three top prizes among the category 1 dealers.

Similarly, CEO of Alenssar Infinity Communication, Chief Edward Emeano, also a winner expressed his joy in the way Globacom appreciated its business partners. According to him, “Globacom has shown its true appreciation of our efforts in marketing the company’s products and services and we are truly grateful”

Also another winner, the Managing Director of Yarab Integrated Limited, Alhaji Mobolaji Abdulrasaq said the gesture is truly appreciated. “We will continue to work towards the progress of the company. Kudos to Glo.”

A key highlight of the evening was the electrifying performance of top musicians and comedians including juju music legend, King Sunny Ade (KSA) and his African beats.

The Groove Band and the duo of Godwin Komone aka Gordons and MC Forever also thrilled the audience to breathtaking entertainment.

APC Primaries: I’m not afraid of Tinubu, others – Yahaya Bello