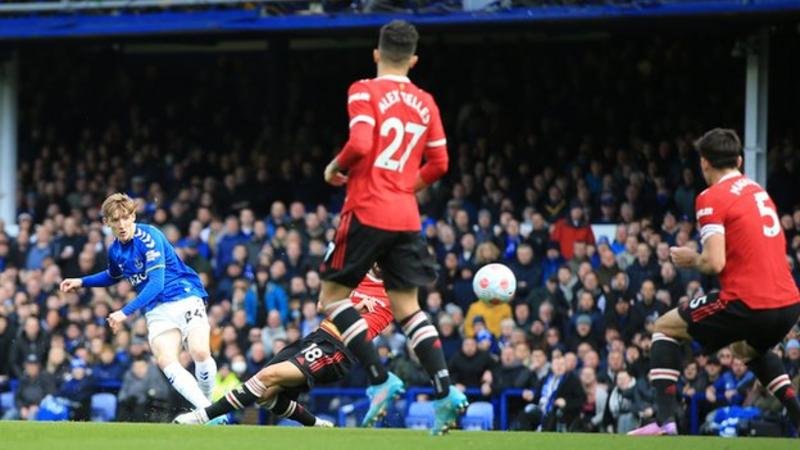 Everton secured what could prove a priceless victory in their battle to avoid relegation as lacklustre Manchester United were beaten at Goodison Park.

Frank Lampard’s side were plunged into even deeper crisis when they lost at fellow strugglers Burnley in midweek to leave them facing the prospect of dropping into the bottom three this weekend if results went against them.

Everton keeper Jordan Pickford made two important early saves from Marcus Rashford and a vital late block from Cristiano Ronaldo, but there was rarely any sense of siege as United lacked urgency, failing to break through in another blow to their hopes of making the Premier League’s top four.

Everton show grit they will need

This could be a huge result in Everton’s season, stopping the rot and lifting some of those dark clouds that were starting to gather over Goodison.

Everton’s win was as far from a classic as it is possible to be but in the wider context it could mean more than so many others this season.

Frank Lampard’s side remain in trouble but the psychological lift provided by this victory, which removes the prospect of dropping into the bottom three for now at least, saw an explosion of joy around this famous old stadium when referee Jon Moss blew the final whistle.

Everton dug deep for victory and had several figures who personified exactly what they will need if they are to maintain their Premier League status.

Everton have won five and lost eight in all competitions under Frank Lampard, with all five wins at Goodison Park

It was fitting that Gordon was the match-winner, the local hero loved by Everton fans for his tireless energy and invention. The supporters warm to him because of his attitude and his deflected strike was a fitting reward.

Richarlison is another who has been exempt from criticism, apart from the fact he might have scored more goals. The Brazil striker’s work-rate is exceptional, chasing down every lost cause and he brought Goodison Park to its feet in the second half when he juggled the ball on his head by the touchline before winning a corner. He reacted by pumping his fists at the Gwladys Street End to raise the temperature inside an already frantic stadium.

And, once more, goalkeeper Pickford made a vital contribution, denying Rashford twice early on as well as Paul Pogba and Ronaldo after the break.

The deafening noise at the final whistle told the story, as Lampard joined in celebrations with the fans at the conclusion of a win that cannot be over-valued.

Manchester United were still chasing a place in the top four and a slot in next season’s Champions League at kick-off. They played as if no-one had told them.

United’s display was embarrassingly mediocre, a gift for an Everton side looking anywhere for assistance to ease their own troubles.

It seems certain Ajax coach Erik ten Hag will be United’s next manager, and if he was watching this he will have a notebook full of uncomplimentary references and names crossed out of his plans.

Everton were nervous and tense but were ultimately placed under no serious pressure by a United side strolling around without the slightest sense of urgency, without any sense they still had something to fight for this season.

The passing was sloppy, so many physical challenges were lost. It was a flat performance that suggests these players have given up on getting any inspiration from interim manager Ralf Rangnick – and he could be forgiven for giving up on them, so abject was this performance.

It was only in the final minutes that Everton showed any serious signs of panic in defence, and the biggest condemnation of United is that Lampard’s struggling side were themselves average but still deserved the win because they were prepared to fight to earn it.

Ronaldo’s late yellow card for kicking the ball away could also be marked down as a rare act of aggression rather than the petulance it was, such was the timid, desperate nature of their performance.

If, as is expected, Ten Hag is the next United manager, what a task he is taking on.