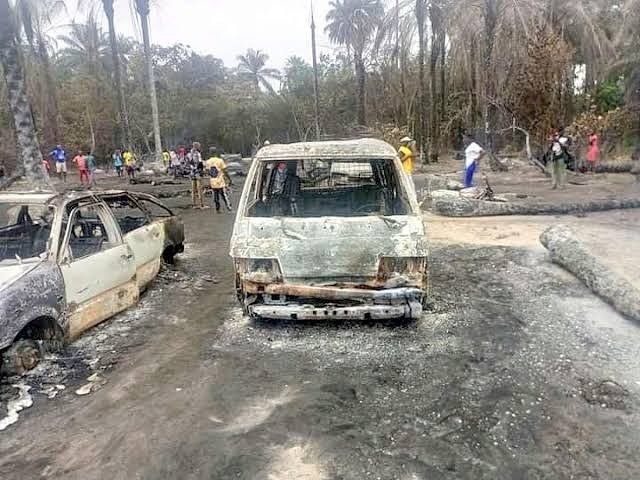 President Muhammadu Buhari has directed the nation’s armed forces, security and intelligence agencies to intensify the clampdown on illegal refineries following the reported deaths of tens of people Friday night after an illegal refinery exploded at Abaezi forest in the Ohaji-Egbema Local Government Area of Imo State.

Reacting to what he described as a “catastrophe and a national disaster,” President Buhari said responsibility for the loss of lives and property must squarely lie with the sponsors of the illegal refinery, “who must all be caught and made to face justice.”

In conveying “the condolences and the full depth and range of the nation’s shock and trauma” to the families of the victims, the Ohaji Egbema community and the government and people of Imo State, the President urged community leaders, the police, and the secret service to never allow the occurrence of the heart-breaking incident in any part of the country again.

Charred bodies were left scattered among burnt palms, cars and vans on Sunday after the explosion.

“There are so many people that died here. I’m pleading to the government to look into this,” Uche Woke, a commercial bike rider, told Reuters at the scene.

The Nigerian Red Cross Society was on the scene on Sunday to assess the blast, which destroyed a section of the Abaezi forest, which straddles the border of the Ohaji-Egbema Local Government Area of Imo state with Rivers state.

The border location is a reaction to a recent crackdown in Rivers on illegal refineries in an effort to reduce worsening air pollution. read more

“In the last month or two, there were several raids and some security agents involved were tackled,” Ledum Mitee, former president of the Movement for the Survival of the Ogoni People (MOSOP), said.

At least 25 people, including some children, were killed in an explosion and fire at another illegal refinery in Rivers state in October.

In February, local authorities said they had started a crackdown on illegal refineries, but with little apparent success.

Government officials estimate that Nigeria, Africa’s biggest oil producer and exporter, loses an average of 200,000 barrels of oil per day, more than 10% of production, to illegal tapping or vandalising of pipelines.