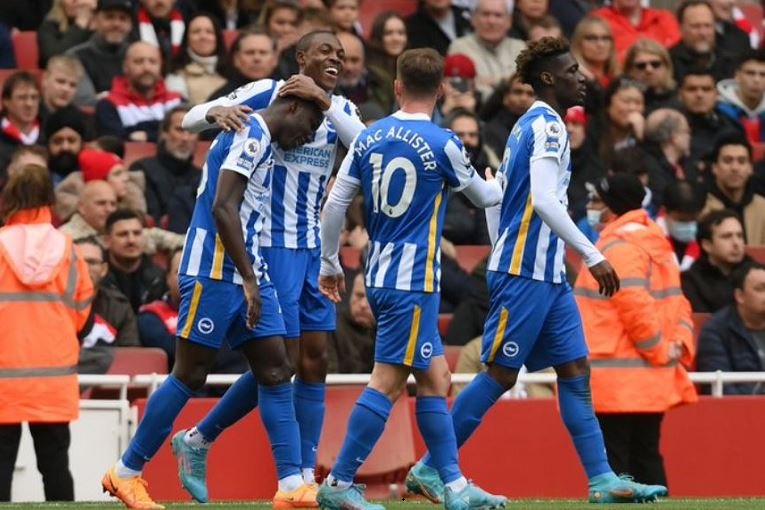 Arsenal handed the initiative in the race for Champions League qualification to rivals Tottenham as Brighton ended their own dire run of form with a deserved win at Emirates Stadium.

The Seagulls – seven games without a victory before kick-off – frustrated the home side with their organisation and efficient forward play in a game where Arsenal failed to look threatening until they mustered a desperate late push.

Leandro Trossard’s curling first-half finish – after a fine assist by the impressive Enock Mwepu – gave Graham Potter’s side something to build on.

And after Gabriel Martinelli appeared to have headed Arsenal level moments before the break – only for a four-minute VAR check to rule him offside – Brighton remained solid before doubling their lead with a superb Mwepu finish.

The Zambia midfielder side-footed home with power from the edge of the box to cap a rounded individual display and produce a look of disbelief on the face of Arsenal manager Mikel Arteta.

Arteta’s side rallied late on with Martin Odegaard firing home from range via a deflection but they stay fifth – level on points with fourth-placed Tottenham, who play later on Saturday – while Potter’s Brighton move up to 11th after just a fourth win in 26 league games.

Marc Cucurella was one of several impressive Brighton performances

Were it not for their fine start to the season, Brighton might well have been worrying about escaping the bottom three, such has been their recent run of results.

Potter’s side had scored just one goal in their previous seven league games and failed to find the net with 31 attempts in last week’s 0-0 draw with Norwich. This win, though, saw them take their opportunities ruthlessly and remain brilliantly organised throughout.

Arsenal were simply lacklustre and showed little in the way of a response to what Arteta described as an “unacceptable” display in Monday’s 3-0 loss at Crystal Palace.

It took 25 minutes for an attempt of note when Gabriel headed wide and, other than Martinelli’s ruled-out finish from a yard out, they were largely limited to minor glimpses of goal until the closing stages.

Lewis Dunk blocked brilliantly to deny Emile Smith Rowe at 1-0 and substitute Nicolas Pepe at 2-0, Yves Bissouma diligently broke up attacks and Marc Cucurella mixed his role in a back three with well-timed forays forward.

Mwepu – who only returned from three months out with injury last week – showed exactly what Brighton have been missing. He produced an assist and a goal, won nine duels – a game high – and intercepted the ball more than anyone on the pitch.

Potter called on Mwepu and Bissouma to drop into his defensive line for parts of the second half in a fluid tactical display and they shouldered the responsibility admirably.

The game saw seven bookings – as many as there were shots on target – and Arteta may point to a stop-start match as a reason for his side’s struggle to find momentum.

When they did in the closing 10 minutes, Albert Sambi Lokonga whistled a shot wide, Odegaard and substitute Eddie Nketiah both hit the bar during the same attack and seconds later the deficit was halved.

Odegaard’s long-range effort deflected beyond the diving Sanchez, prompting a final few minutes in which Arsenal pressed keenly for a point they did not deserve.

They saw 65% of the ball and had 20 shots – 16 off target – but Brighton’s poise for long spells merited this win.

Arsenal will need to put two abject displays behind them quickly if they are to claim that crucial fourth-place at the end of their eight-game run-in.