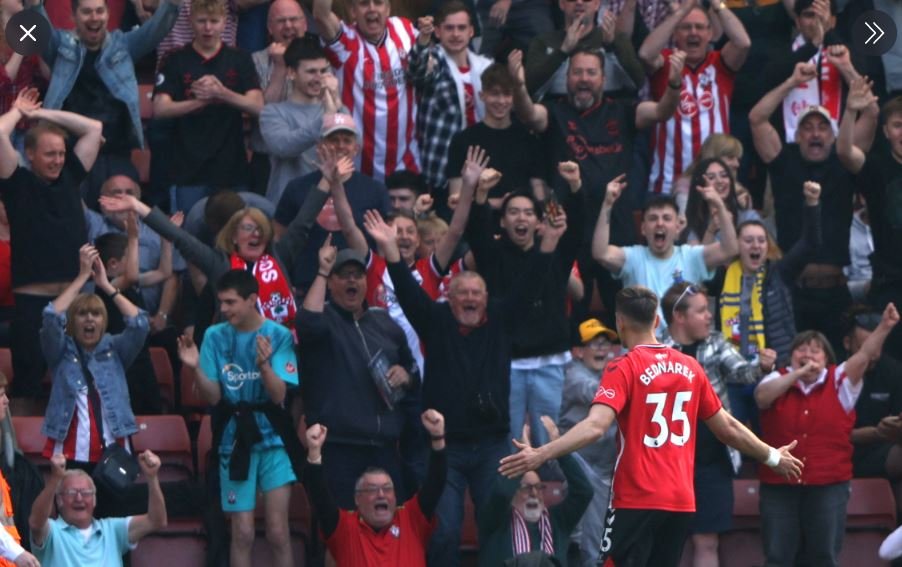 Arsenal missed the chance to move level on points with fourth-placed Tottenham as Southampton won at St Mary’s to inflict a third successive defeat on Mikel Arteta’s team.

Jan Bednarek scored the game’s only goal late in the first half after the Gunners had failed to adequately deal with a Saints corner.

Bukayo Saka was denied from point-blank range by Southampton goalkeeper Fraser Forster with the score still goalless, but further clear-cut openings proved hard to come by for the visitors until the closing stages of the second half.

Emile Smith Rowe forced another fine save out of Forster after latching on to Yan Valery’s attempted clearance, before Martin Odegaard dragged a left-footed shot wide of the near post after cutting in from the right.

Forster produced yet another impressive stop to deny Granit Xhaka late on as Arsenal desperately piled forward in search of an equaliser.

The Gunners remain three points behind fourth-placed Tottenham – who were beaten at home by Brighton earlier on Saturday – although they do still have a game in hand on their north London rivals.

Southampton, meanwhile, climb to 12th after claiming their first league win since February.

Following lacklustre displays at Crystal Palace and at home to Brighton last weekend, Gunners fans may have hoped this trip to St Mary’s would prove to be an ideal fixture to reignite their top-four push.

Saints had lost five of their past six matches in all competitions before Saturday and conceded 19 goals in the process – including a 6-0 capitulation at home to Chelsea in their last match. They had also won only one of their past 12 meetings with Arsenal in the Premier League.

The hosts had Forster to thank for keeping the score goalless in the early stages of the first half, the veteran goalkeeper getting down low to palm Gabriel Martinelli’s curling shot past the post before brilliantly tipping Saka’s close-range effort over the bar following an error from Valery.

Although the Gunners continued to dominate possession as the half wore on, they lacked the tempo to create further openings against a resolute and defensively organised Southampton. The hosts then punished Arsenal when Bednarek fired home his fourth goal of the season with a minute of the first half remaining.

When Arsenal did manage to penetrate the Saints rearguard late in the second half, they found Forster in inspired form. The 34-year-old did magnificently to parry Smith Rowe’s goal-bound effort wide before getting in the way of a low Saka shot.

Forster also managed to get his fingertips to Xhaka’s curling strike with the clock ticking towards 90 minutes – although the Switzerland international’s effort may have been heading narrowly wide.

Arsenal still have a game in hand on Spurs in fourth but with matches against Chelsea, Manchester United and West Ham coming up in the next fortnight, this will go down as a missed opportunity for Arteta and his players.